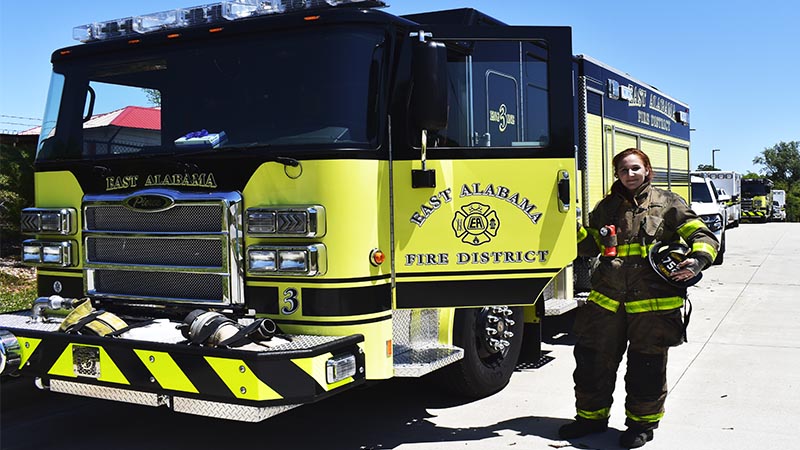 On April 22, 2021, East Alabama Fire District not only graduated its first-ever rookie school class but according to fire chief Kerry Pickard, the first female firefighter.

Alexis “Lexi” Lisenby said she did not know she was the first female firefighter in the district until Pickard told her.

“I didn’t realize that,” she said. “That’s amazing, to be a part of it. Happy to be that stepping stone.”

“For her to be our first one is beyond exciting,” Pickard said. “Not only the fact that she’s our first female, it’s just the employee that she is, what she represents.”

Being a first responder was always something Lisenby was interested in and prior to joining EAFD, she was a paramedic. Lisenby says she was an emergency medical technician (EMT) since 2013 and gained her paramedic license in 2017.

What attracted Lisenby to the fire side of being a first responder was not only the excitement but also the science and helping people.

“I know everybody says to help folks, but just no matter what situation I am in, I just want to help,” she said.”

Pickard says Lisenby is exactly the type of person the department looks for.

“Lexi is the ideal employee that we look for, she’s energetic,” Pickard said. “When she came to work for us, she came as a single role paramedic, and she expressed a long time ago that she wanted to go to the fire side. Once we decided that she’s gonna be with us for a while, and she started showing initiative, we figured out that’s what we want, that’s the type of people we want to be.”

And while Lisenby says she doesn’t look at it as being a female firefighter, she admits some of the physical portions were sometimes more challenging.

“During rookie school, I’ll definitely say some of the physical portions were a lot harder, you have to find ways to be able to just physically be able to do things yourself,” she said.

Her mental focus is what helps her through the tough parts.

“The biggest thing is first the mental barrier that I can do this,” she said. “When pushing myself, honestly, no matter what shift I’m on or who I’m working with, I want them to have faith in my capabilities.”

She has high praise for her peers and the family dynamic that she’s felt up to this point.

“I mean it’s like joking with my brother, everyone has been so welcoming,” she said.

Although she is very early on in her firefighting career, Lisenby said she is eager to learn more and possibly get into fire investigations at some point down the road.

Lisenby is married with three children and her husband is also a first responder, working as a police officer in Montgomery.

In her free time, Lisenby enjoys fishing and kayaking along with spending time with her family.

While the couple lives in Montgomery County, Lisenby says she has fallen in love with the Chambers County area and is working to get closer.