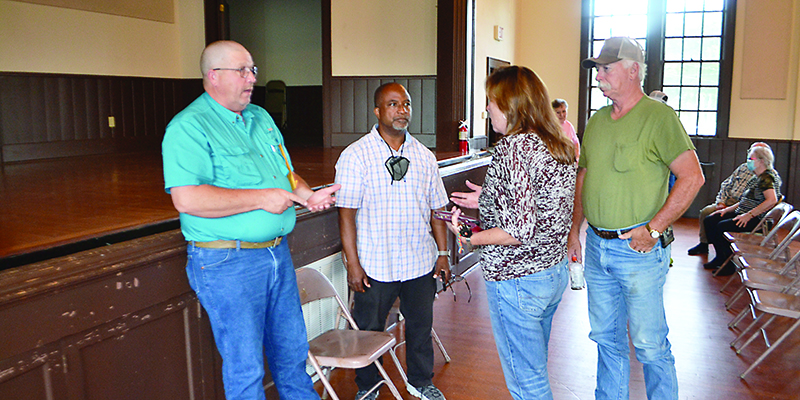 UNION HILL — More than 50 northwest Chambers County residents gathered at the Union Hill Community Club Thursday evening seeking information from two county commissioners on whether efforts are underway to locate a rock quarry near their homes. Commissioners James Williams and Doug Jones represent large areas of the rural county and responded to the rumors by discussing what they know.

There’s wide suspicion that something quarry-related is going on, given the recent sale of a 210-acre site and test drilling that’s allegedly been going on on the newly acquired land.

Some residents complained that they weren’t getting straight answers about what was taking place. Others made it clear they didn’t want a rock quarry disturbing their peaceful way of life with frequent blasting, heavy trucks on the road hauling away gravel and silica in the air making it difficult to breathe.

“I know a lot of you are having a lot of stress over this,” Williams said. “Feel free to express your opinions. I will tell you what I know at this point. To the best of my knowledge, there is no quarry on the way. There is some drilling going on right now, but it’s not just in Chambers County. It has also been going on in Tallapoosa and Randolph counties and across the state line in Georgia. It’s been going on for several years now.”

Williams said he’d recently spoke to Johnny Cleveland, who recently sold the land to Maple Farms LLC of Birmingham, Ala.

“He called me and asked me, ‘What in the world was going on in Chambers County? I’m getting all kinds of calls from people who live there.’ He told me he hoped a quarry wouldn’t be coming to Chambers County because it would hurt his pocketbook in Wadley (where a quarry is presently located).”

Adding to the suspicion that something is going on and being kept secret is that an adjacent property owner is in the process of selling land to Maple Farms LLC. Williams said the family that owns that property couldn’t talk about it.

The land that Cleveland sold is under a conservation easement, which offers tax incentives to the owner provided they are good stewards of the land. They would lose that tax break if they did something such as build a quarry.

Williams said there are conservation easements all over Chambers County. It’s a common practice and rewards a landowner from avoiding using the land in ways others would not like.

“There are all kinds of rumors flying around, but I haven’t found any truth that a quarry is coming to Chambers County,” Williams said. “I wouldn’t want a quarry coming to my backyard either. I will be glad to share any information I have to you.”

One person present asked if the county commission could draft a moratorium on quarries coming to the county.

Williams said they could try but that the best way to keep one out is to have countywide zoning, and he was opposed to doing that.

With zoning, he said, people would be required to file building permits anytime they wanted to make improvements to their property.

“I would be willing to pay a $70 fee to do that if it kept out a quarry,” one person said.

“There are rules with zoning,” said Jimmy Coggins, another speaker at the meeting. “It can tell you that you can’t cut timber and do lots of other things. They can also keep a pig farm from locating next door. Zoning laws are only as good as they are written up to be.”

Several people present expressed concerns that a quarry could cause wells to run dry. There is no public water on the west end of the county, and everyone gets their water from wells. In the northwest part of the county, wells are bored through rock to find water. It’s possible that quarry activity could bleed away some of these underground sources.

In many cases when a quarry is abandoned, the site fills in with water.

One man present said that people could be getting worked up over nothing.

“I don’t think it makes good sense financially to put a quarry here,” he said. “To be profitable, a quarry needs to be located near a railroad. That’s why the one in Wadley is doing so well. There’s no railroad near this site in Chambers County.”

Another person said it came down to basic democracy.

“We shouldn’t allow something that 90 percent of the people are opposed to,” he said.

Williams asked the crowd how they felt about zoning.

Another man said he lived in Tallapoosa County and had found the countywide zoning that’s present there to be highly restrictive.

“You have to check with the county and get permits before you can do any building,” he said.

“Permits aren’t that bad if they can keep out a rock quarry,” someone else said.