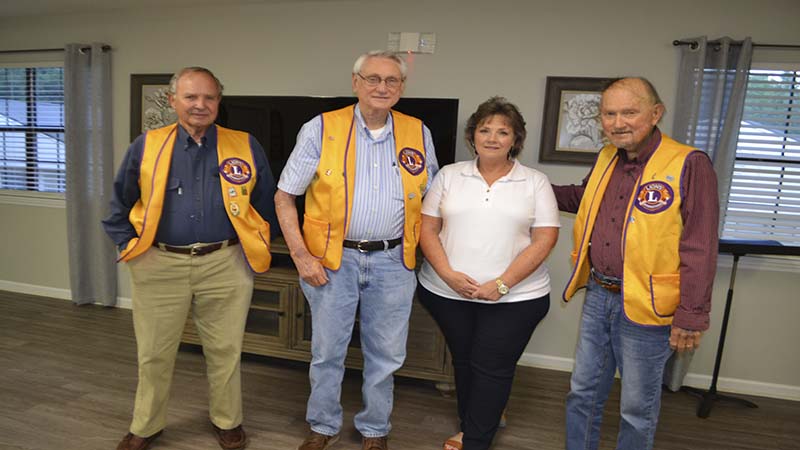 VALLEY — Chambers County Revenue Commissioner Beth Abney was the guest speaker at the Monday meeting of the Valley Lions Club, held inside the community room at Sylvia Word Manor. She’s been the county’s revenue commissioner for the past two years and has been with the office for 23 years, most of that time as a personal property appraiser. She was appointed to the office on March 1, 2019, and elected to a full term in 2020. She succeeded Wendy Williams. who retired after a number of years as revenue commissioner.

In her first two years in office, Abney has done something remarkable as the state found zero errors in her final report. Even in the best of circumstances, there are some very minor errors, leaving the office a few pennies short of perfection.

Abney said it had been very humbling for her to have been elected by a large margin in a contested race. She carried every precinct.

“We are right now finishing up the 2021 tax year,” she said. “The past two years we have collected over $16 million in net taxes. We expect to be in that same range this year. We have deadlines to meet in having certain things done. We will soon be sending out the Board of Equalization notices.”

The notices will be going to those property owners whose land has seen an increase in value of at least $500 an acre.

“If you disagree with the new value, you can appeal it to the Board of Equalization,” Abney said. “They meet once a year in July.”

Abney said that she’s glad to talk to people who want to know about homestead exemption.

Under Alabama law, a homestead exemption is defined as a single-family, owner-occupied dwelling and up to 160 acres of land that adjoins it. For anyone under the age of 65, it applies to property that’s assessed at no more than $4,000 in value. For those who are 65 and older, there’s no maximum amount for the assessment as long as the property is not more than 160 acres. Those who are blind or have some kind of permanent and total disability are also eligible for homestead exemption.

“I want to make sure you have this exemption if you are entitled to it,” Abney said.

The Code of Alabama is somewhat vague when it comes to tax sales.

“It says that these sales should take place at the courthouse door,” Abney said. “That can be hard to do if the weather is bad outside. The traffic on 431 can be a problem for us if we try to do it outside.”

Abney said that Jefferson County was sued one year because a tax sale did not take place on the courthouse steps.

The amount of tax revenue has a way of increasing every year. New homes are built and there are new businesses every year which increases the local tax that’s collected.

This year, for example, Chambers County has collected over $20 million gross.

“When we take out all the agencies some of it goes to, it gets us down to around $16.1 million,” Abney said. “When I send the abstract to the state. it had better balance out. If not, I am personally responsible for it. That’s the way I look at it.”

Abney considers her staff one of the best in any tax office anywhere.

“When you come to our office, you will meet very experienced people,” she said. “I don’t put myself on a pedestal by any means. I know that the job we do is a team effort. It takes a total team effort to do the job well.”

Every employee knows there are three things they can be dismissed for: (1) disrespecting someone, (2) failing to do the job they have been assigned and (3) stealing.

“I hope my staff stays with me,” Abney said. “I would like to run for office at least once more.”

Abney said she has never seen herself as a politician.

Abney and her husband live in the Penton community. They have three children and two grandchildren.