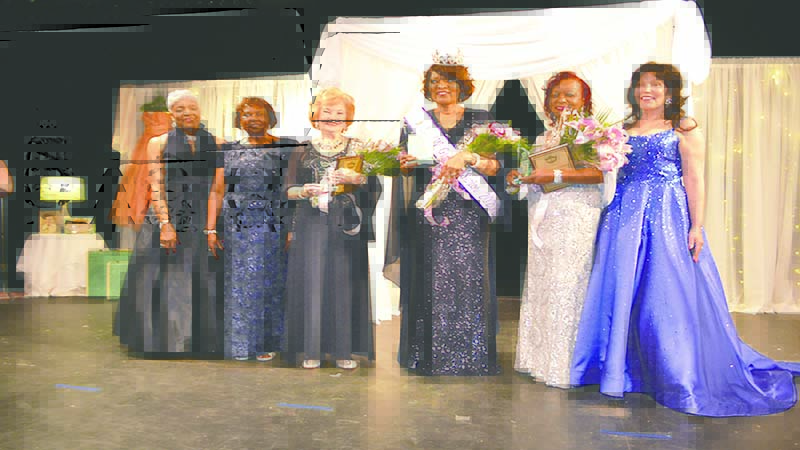 WEST POINT — The new Ms. Southwest Georgia Senior is a member of the West Point City Council. Sandra Thornton was crowned the new queen Saturday afternoon at the New Horizon Community Theatre. Thornton was also the pageant’s People’s Choice Award winner, won the talent competition with her rousing Tina Turner version of “Proud Mary” and captured everyone’s heart when she talked about surviving a scare with breast cancer and wanting to be a voice for those who felt underserved in the pageant’s interview portion.

Runner-up was Easter Hardy of Albany, while the second runner-up was Patty Tidwell of West Point.

“The purpose of the pageant is to promote positive aging,” said Lynda Dawson, president of the Southwest Georgia Classic Club. “We want the world to see that growing old is a special privilege. Today’s seniors are role models; they can teach people how to live purposeful lives. Many of these ladies have discovered the magic of expressing freedom to experiment with new activities and previously unknown talents. Most discover new opportunities for serving mankind and experiencing subsequent rewards.”

Those who participate in the pageant have the opportunity to be a part of the Southwest Georgia Classic Club’s entertainment group, the Golden Divas. They present shows at assisted living centers, retirement homes, civic clubs, church groups and other venues.

“Our audiences are always so appreciative, and we leave them begging for more,” Dawson said.

Saturday’s contestants had some delightful skits in the talent competition.

Retired teacher Patty Tidwell, who likes to ride motorcycles with her husband, did a hilarious takeoff on the famed Vitameatavegamin cough syrup commercial from “I Love Lucy.” In the original 1950s telecast, Lucy Ricardo wanted to do the commercial just to be on live TV. The problem with taking the cough syrup is that it was good tasting but loaded with alcohol. After a few teaspoonfuls, Lucy was drinking it straight from the bottle and got loaded in front of a live audience. Tidwell did a very good take on that much-beloved comedy routine.

Vera Varner of Columbus lip-synched the Hank Williams classic “Hey Good Lookin’.” She said that her dad loved country music and got her to like it when she was growing up. Her special interests today include church and family, reading and watching Hallmark movies and Westerns.

Nellie Barber of West Point, who is retired from running a daycare center for children, showed how art can be fun when inspired by music. She spray-painted a large white canvas with the many colors of the rainbow while the Louis Armstrong classic “What a Wonderful World” played.

Thornton stole the talent show with her Tina Turner impersonation.

Turner’s live recording is best remembered for her introduction, saying that the song would start nice and easy.

“But there’s just one thing with that,” she said. “We never do anything nice and easy. We always do it nice and rough.”

Thornton’s special interests include children, human services, and the prevention of abuse to children and the elderly.

“I have been blessed in my life,” she said in her interview. “I want to be a voice for those who feel underserved.”

“You need to have the mindset that you will survive it,” she said. “You need to be an example for others who will be diagnosed with it. You need to inspire them that they can beat it, too.”

In her farewell remarks, outgoing Ms. Southwest Senior Georgia Alexis Paul said that aging is a privilege not everyone gets to experience. Sadly, many seniors are lonely and have a sense of hopelessness.

“They have little opportunity to socialize, laugh and share their stories with others,” she said. “Georgia Classic Club women are fortunate enough to still be actively involved in reaching out and helping others. Encouragement is a powerful tool. This is how the Georgia Classic Club members reach so many. I have never met a more empowering, compassionate and supportive group of women. They inspired me and built my courage to become one of them through my pageant experience.”