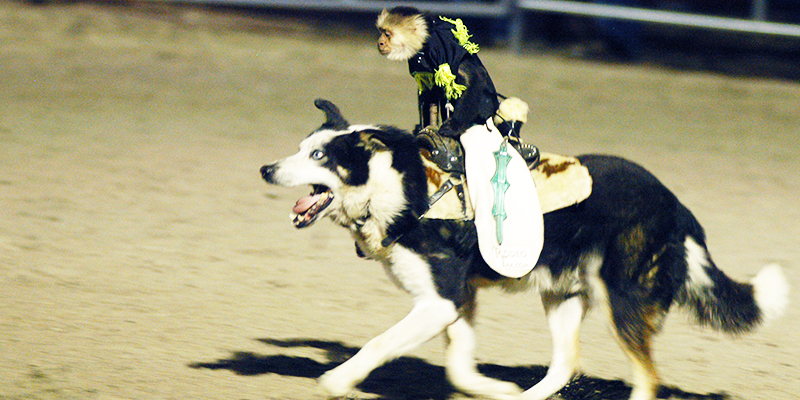 LaFAYETTE — The weather was near perfect and people turned out in a big way for this year’s Chambers County Sheriff’s Department Rodeo. Sheriff Sid Lockhart has been doing this for 25 years now and said that this one was one of the best ever.

“The turnout on Friday night was really good, and it was even better on Saturday,” he said. “Everything couldn’t have gone any better than it did those two nights. We could not have ordered better weather. We saw some really good cowboy and cowgirl action in the arena. The clowns were really funny and those monkeys riding dogs were absolutely hilarious.”

The monkeys were the star attractions for Tim “Wild Thang” Lepard and Team Ghost Riders. Lepard told the crowd Friday night that as he was growing up in Memphis in the 1960s he dreamed of having a pet monkey. He now has three of them performing crowd-pleasing rodeo acts.

The leader of the group is named Sam. He has been riding the backs of border collies since he was two years old and is now 30 years of age. All three Capuchin monkeys are dressed like cowboys with vests, chaps and cowboy hats. Sam is nicknamed “the Duke” because he wears his hat cocked to the side similar to the way John Wayne wore his hat in the movies. Meglynn is the female of the group.

She once helped raise $15,000 for the Susan B. Komen Foundation for Breast Cancer Research.

Eight-year-old Little E loves everything and everybody. Lepard likes to dress him like Elvis for some of his shows.

“I followed my dream and have pet monkeys today,” he told the crowd. “Following your dream is what life is all about. I encourage each and every one of you to follow your dream.”

Lepard thanked the crowd for their warm reception.

“Believe it or not,” he said. “these monkeys love it when people clap. They get excited when people like what they do. In all of our shows, I thank those who put on a uniform every day to serve our country. They mean so much to all of us.”

Lepard today lives in Pontotoc, Mississippi. He travels far and wide putting on shows at Major League Baseball games, NFL and NBA games, NASCAR races, rodeos and other such events.

He gives his monkeys the best of care. He’s careful to follow USDA regulations on animal care.

“What you put into somethings is what will come out,” he said. “I put a lot of time and care into my monkeys. I treat them almost as if they were human.”

There were lots of smiles and laughter throughout the crowd as the monkey-riding border collies raced through the arena herding sheep into a smallholding pen that was set up in the middle.

Lockhart said he did have one disappointment with this year’s rodeo. Unlike past years, there was no Special Needs Day on Friday. In past years, as many as 1,000 intellectually challenged youngsters from throughout the east Alabama area were bused to the Chambers County Agricultural Park to take in the excitement of a rodeo. For a second straight year, it was canceled as a COVID-19 precaution.

“We hope we can resume it next year,” Sheriff Lockhart said. “I think things are getting back to normal. Everything seems to be heading in that direction.”

Proceeds raised from the rodeo go to a variety of Sheriff Department needs. Some of this year’s funds will likely go to getting a new drug dog.

“One of our K-9s has aged out,” Lockhart said. “We will have to replace him. There’s also some equipment needs we can address.”