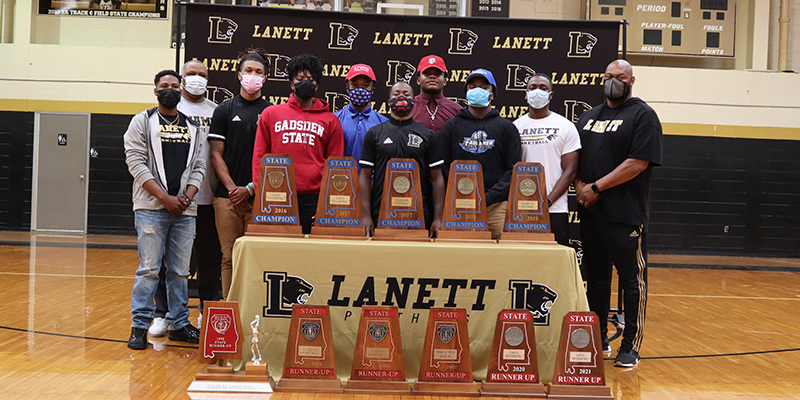 The school’s fire on Feb. 1 delayed it, but Lanett High School held its signing day on Friday, allowing the six seniors to officially sign in front of their families and friends.

Kintavious Dozier was the lone basketball player to sign, choosing to continue his career at Gadsden State. Trey Abner and Seidrion Langston are going to Kansas, signing with Fort Scott and Independence respectively. Kadarious Zackery signed with the University of West Georgia, while Kelvin Zachery signed with Faulkner University.

Larontavious “Tae-Tae” Hurston was the last player to announce where he was going to continue his football career, choosing Jacksonville State University.

Hurston was a dynamic three-way player for Lanett, starting at both wide receiver and defensive back. As a senior, Hurston finished with 369 receiving yards on just 20 catches, scoring five touchdowns. On defense, Hurston finished with 40 total tackles (26 solo), six interceptions and 17 pass breakups. On special teams, he averaged 33 yards per punt return and 38 yards per kickoff return. He scored six special teams touchdowns.

“There weren’t too many colleges that hit me up, but I know that coach Story went to Jacksonville State. He has a couple of connections and pulled some strings and got me in,” Hurston said.

Because of his versatility, the Jacksonville State coaches haven’t decided to put the two-time state champion, but Hurston thinks he will be playing on offense for the Gamecocks.

“I like scoring on people,” Hurston said with a smile.

In his four years at Lanett, Hurston has been part of two state championship teams. He was a key reason the Panthers defeated Sweet Water in the 2019 state semifinal game, finishing with 177 yards and three touchdowns on six catches. One of the touchdowns was the game-winner with just 38 seconds left in the game.

“People really didn’t think I was going to come back as hard as I did. That really was my motivation,” Hurston said. “Story pushed me a lot, making sure I was doing my exercises for my ankle and my rehabilitating at the right time so I could back and start playing.

After breaking his ankle, his teammates told him they were going to win him a state championship. They followed through on their promise, defeating Leroy 33-15 on a snowy Bryant-Denny field.

“The boys told me they were going to get me a championship,” Hurston said. “I got in that game, but only on a field goal. Ken-Ken [then quarterback Kristian Story] could have thrown me the ball, but he didn’t throw it to me. That was the most fun year. We were down there at Bama playing in the snow for a state championship. It was a great experience.”

After finishing his Lanett football career, Hurston had the opportunity to play in the DREAM All-American Bowl in Gulf Shores. He got to suit up with Kelvin Zachery and Abner one last time in that game.

“It was a great experience. It wasn’t a big thing, but with the group of guys that we had and how we bonded in three days, it was great,” Hurston said.