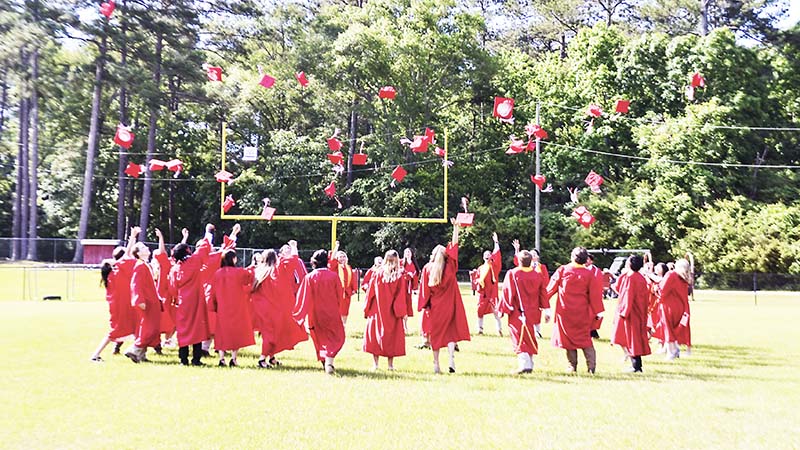 LANETT — A total of 37 Springwood High seniors each received a diploma and a smooth river stone at commencement exercises Saturday morning on the field of Wildcat Stadium. The diplomas were presented by history teacher Warren Nolen and Sykes Smith, chairman of the Chattahoochee Valley Educational Foundation. Head of School Lowrie McCown gave a graduating senior a river stone to make the point that it took hundreds of years of being washed downstream and jumbled against other rocks for the rough edges to get worn off and for that stone to bear the sheen of some fine polishing.

“We are celebrating what these students will be accomplishing well beyond the classroom,” McCown said in opening remarks at the ceremony. “This is a rite of passage for what they will be doing as adults.”

One of the students receiving a diploma on Saturday, Justin Henson, is part of an amazing legacy at Springwood. At least one member of his family has been a student at Springwood for the past 50 years. A member of fellow senior Jenna Bolton’s family attended the school for the past 48 years. Saturday’s commencement was the 48th graduation ceremony in school history.

“To have had entire families attending Springwood is part of a legacy few other schools have,” McCown said. “It’s an exceptional tradition for any school, and there’s no question this year’s senior class has been exceptional. Their entire senior year took place during a global pandemic. Each of these students here today is well versed in virtual education.”

Hongliang (Jason) Liu student earned a diploma in absentia. He went back home to China following his junior year in 2020 and was not allowed to return to the U.S. due to travel restrictions. He completed the requirements for a diploma through some truly far distance education online. There was a 12 hour difference from what was being sent and received. The student has received a nice reward for what he went through as he has been accepted as a student at Rutgers University in New Jersey. The Chinese student has been sent a cap, gown and diploma. He and his family watched the ceremony live online.

The Class of 2021 did not get to see a majority of their classmates on a day-to-day basis. At one point, they had to quarantine for 14 days.

“One day we had to quarantine 35 kids before the start of school. Some of our cheerleaders had to quarantine three times,” McCown said. “Our students, faculty and staff did an exceptional job of keeping Covid at bay, and I salute them for that.”

It’s a long-held tradition at Springwood to roll the campus on the eve of graduation. That took place once again this year. McCown joked that he had learned some new skills in pulling toilet paper our of trees.

“Thank you for using the 10-ply kind,” he joked to the seniors. “It’s stronger and holds together better when you are tugging on it.”

There was also a large number of tiny baby dolls scattered over the campus. They had to be gathered as well.

McCown said he was really proud of the students for collectively earning more than $1.65 million in scholarship offers.

McCown thanked the teachers for remarkable work during the school year dealing with the isolation caused by COVID-19. He led a round of applause in appreciation of the job they did under very trying circumstances.

He quoted Psalms 112:11, stating that those who are truly righteous will never be shaken in their faith and will be remembered forever.

McCown said he hoped the students will keep their river rock as a keepsake.

“When things go bad, think of what that rock went through to be polished,” he said. “If a river rock could speak about what polished it, the stories he could tell. This has been a year of polishing for you,” he said. “Being polished has allowed you to overcome Covid.”

McCown concluded by asking the students to remember the words of the great lay theologian C.S. Lewis who once wrote that God whispers to us when it comes to our pleasures but shouts when we are in pain.

He then introduced Class Valedictorian Amber Franklin as the embodiment of the ideal student athlete.

“There are not enough words to describe what she means to other students,’ he said.

“We have overcome a very difficult year,” Franklin said. “The memories we have of teachers like Patti Slade and Dale Freeman will never leave us. There are challenges in ZOOM education, but our teachers overcame them. They became great examples to us in having perseverance in maintaining proper direction.”

Franklin said she would never forget taking part in a senior retreat with her fellow classmates and teachers where they went kayaking on the Chattahoochee River. At one point. they stopped to kick the water and to playfully splash each other.

“It ended up with each one of us, even Mr. McCown, jumping in,” she said. “It helped us to relax, break the tension and have a little fun.”

Franklin said it had been a great experience for her to have gone through school with her classmates.

“Each of you is blessed with character traits that will serve you well in life,” she said. “I can only imagine the powerful impact each one of you will have on the community where you will live. Let us never forget the lessons we learned here at Springwood. I would like for each one of you to strive to meet your full potential. I will be eternally grateful to each one of you. I wish you all the best.”

The Class of 2021 has started a new tradition at Springwood. They wore colored cords representing their involvement and leadership in school activities. Gold represented academic achievement, silver meant having attended the school from K5 through 12th grade, red stood for participation in the school yearbook staff, the news team, robotics and math teams, black was for theatre, chorus, athletics and band and white for participation in clubs like the FCA, LEO, SGA, or being a class officer.

Following the ceremony, the new graduates continued another school tradition by marching across the football field to the south end zone and tossing their caps in the air.