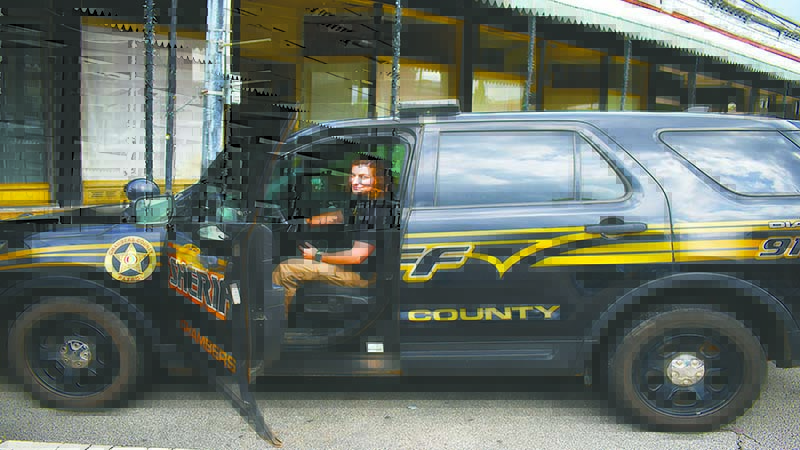 However, after a little coaxing from a friend, she decided to look into it.

“One of my friends went to the Auburn Police Department about two years ago and he was like, ‘have you ever thought about being a cop?’” Rivera said. “I was like, ‘no, I couldn’t do that’ and then I started thinking about it more and more.”

Rivera’s research went deeper than what you might hear in the media and focused on policies and what law enforcement is from a different perspective.

Law was not foreign to Rivera as she was a paralegal in the Army National Guard, which she joined directly out of school. She attended Eastwood Christian School in Opelika and said the guard was something she had always wanted to do.

“That was something I wanted to do,” she said. “My oldest brother is a command sergeant major in the Army … I really looked up to him as a kid, So I did it.”

Rivera says she enjoyed her time in the National Guard but wanted something more than one weekend a month. Rivera has two small children and knew that going active duty was not the next move.

“I have kids, so I didn’t want to go active after that and just move around,” she said.

Rivera moved to Chambers County in 2017 and says the community is a small town, but not so rural. That mix is what she said she likes about living here.

“I like the small-town aspect, but it’s not so rural that you don’t have anything to do,” Rivera said. “It’s not as high paced, it’s not everything going by so fast that you can’t keep up with it.”

Becoming a member of the law enforcement community was not an easy process, Rivera said. She applied to other agencies several times and thinks her lack of experience was holding her back.

“I applied to several different places for about eight months before I got hired here. That was definitely not an easy process,” she explained. “I went through the board and then didn’t pass the next step, so it was kind of frustrating. I didn’t have any experience, so they’re looking for people that they don’t have to send to the academy.”

It turns out that living not so far away from Rivera was a sergeant with the Chambers County Sheriff’s Office.

“I was neighbors with one of the sergeants here, and I was talking to him about Chambers County, and he kind of put in a good word for me here. So when they called, I jumped on it,” she said.

From her time in the National Guard, Rivera said she expected the academy to be similar to basic training and going in with that frame of mind helped her.

“There’s no comparison at all, because these people actually called us by our names,” she said. “If I hadn’t been to basic before, it probably would have been a lot tougher. It was more mentally taxing, I think, than physically.”

You wouldn’t know it was mentally taxing by her final grade. Rivera earned a 99.2 percent and was tops in her class, earning her the academic award, which is a GPA-based award. Rivera says she was the only one in the class of 40 with a 100 leading up to the final exam with another person behind her with 99 percent.

“When we took the final, I got a 96, and he got a 94, so we’re good,” she said. “They don’t actually tell you that you’re going to get the award until you hear your name at graduation.”

During a recent Chambers County Commission meeting, Chief Deputy Richard Carter shared in the excitement of the academic achievement.

“She did a great job, we’re proud of her and we’re glad to have her on board,” Carter said.

Rivera was one of seven women in her class at the academy and said she did not feel as though they were treated any differently.

“In the academy, they definitely did not make allowances,” she said. “I feel like, if they didn’t think you could do it, they were going to try to see if you couldn’t. Just because you’re a girl, doesn’t mean you get an easy job, and I like that.”

Being on the street, Rivera understands that she is not going to be treated any different than a male deputy responding to a call, and she must be prepared. She said the academy prepared her well.

She said an example was trying in hand-to-hand combat. Rivera said she would often be paired with men much bigger than her, and she had to figure out how to get out of situations.

“They paired me with one of the biggest guys in the class, and it was tough,” she said. “It kind of was a wake-up call. I realized, on the street, if someone this size comes at me, I have to be ready.”

The hardest part of the academy for Rivera, she says was being away from her children. Rivera is the mother of a two-year-old and a four-year-old.

Now that she is out of the academy, Rivera says she enjoys the sense of accomplishment.

“I enjoy feeling like I’m actually accomplishing something,” she explains. “In each call, it might just be another call for us, but to that person that’s like the biggest thing of their day or their life even.”

Rivera has a very specific short-term goal: to become a member of the multi-jurisdictional SWAT  Team.

Rivera must be with the department for two years before that can happen.

Long-term, she says she will have to wait and see, but she is enjoying her time in Chambers County as well as in law enforcement.

“I like Chambers County a lot,” Rivera said. “I like this agency. I like the family vibe that we have. We all know each other, we’re all really close.”