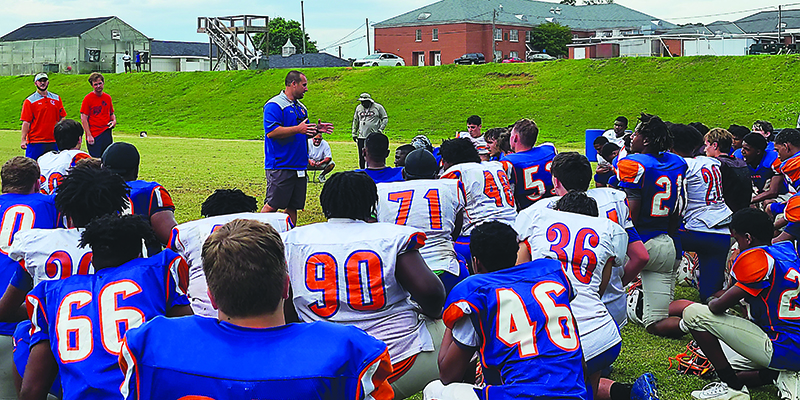 The plan for the Valley football team during the spring was to work on themselves by becoming a physical team to prepare for a grueling 6A schedule. For most of the first week of spring camp, the Greater Valley Area has dealt with rain that is keeping teams from conventional practices. While some teams have been able to get other work in, focusing mainly on working in their weight rooms, Valley missed two of its scheduled three practices in the first week.

Luckily for the Rams, they were able to get their work in on Tuesday.

“We kind of got rained out our first week. One of the days, we could have probably practiced, but we didn’t want to push it,” head coach Adam Hunter said. “It’s one of those things where you don’t want to get anyone hurt coming out in the rain. We were fortunate today to get it in. We’re battling the weather and it looks like it’s going to rain the rest of the week. Hopefully, we can get these things in and get our full 10 days in so we can get better.”

On Tuesday, Valley practiced like it was in the middle of the season, going in full pads and running through individual drills before coming together for offensive and defensive walk-throughs. They also had a quick seven-on-seven game, scrimmaging themselves.

This is allowing the  Rams coaching staff to figure out what players can play where, as they replace most of their defense and several spots on offense heading into the 2021 season.

“We’ve got some kids stepping up,” Hunter said. “I think Cam Dooley has really stepped up at the quarterback position. He’s really gotten after it. He’s also playing a little bit of safety for us. He’s brought some intensity. We have some kids on defense that we brought back that didn’t play last year. Cam Macklemore has really shown out this spring. Isaiah Robinson, [who] has gone to inside linebacker, and Quen Story have really shown they are ready to take on that leadership role. We’re replacing a lot on defense, especially inside linebacker and our secondary. Those guys have to get into that role and take over this team, and they’re doing that.”

So far, Valley has worked out three days of spring football, and Hunter is pleased with the level of physicality the team is working with so far.

“We’ve had some really physical practices and gone old-school,” Hunter said. “We talked about it as a coaching staff, we need to get real physical. We’re playing at the 6A level, if you’re going to win, you’re going to win upfront and you have to be physical. We’ve really preached that this spring and we’re going to continue to preach it heading into the summer. We’re trying to change  the mindsets of these kids and make them tougher mentally and physically.”

Last season, the Rams missed their spring season due to the start of the COVID-19 pandemic in March. Shortly after, the Rams had a coaching change, forcing Hunter to take the reigns halfway through the strict COVID-ruled summer. Now, Hunter is able to evaluate his team better, finding the best fit for his guys.

“We felt like we really needed to get the kids out here to see what positions they can be in, move them around and put them in their best spots heading into the summer. The only way we’re going to be able to do that is to see them on the field,” Hunter said. “We’re taking the spring as an evaluation period because some of these guys didn’t see any reps last year. We didn’t play a whole lot of games due to COVID, but these guys didn’t get a lot of reps because we had so many that played defense and offense as seniors. This is big for us to get these 10 days and see where we’re at heading into the summer.”