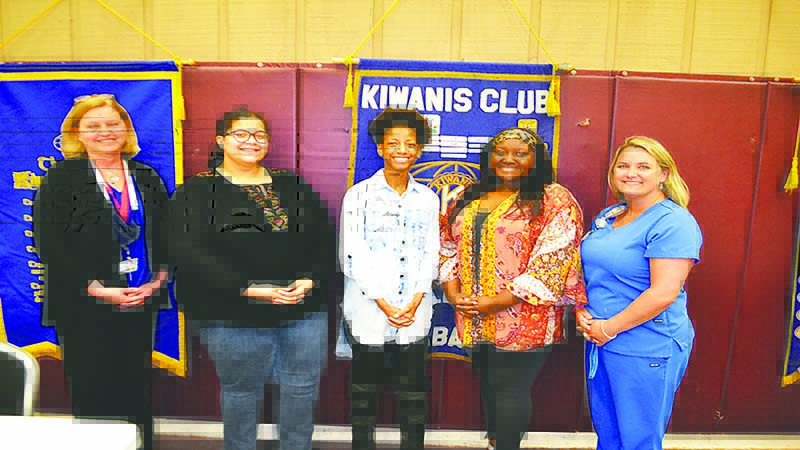 VALLEY — On Wednesday, three officers from the Valley High Key Club talked to members of the Kiwanis Club of Valley about having endured two Covid-impacted school years and their plans for the future. Dr. Sharon Weldon, the Chambers County School District’s director of secondary schools, introduced Key Club co-presidents Hazel Floyd and Ambreonia Garner and Deasia Stewart, the club secretary.

“These girls are phenomenal examples of what’s going on in high school,” Weldon said, explaining that they’d had experience in the CCSD’s virtual school.

“I love virtual school,” said Deasia Stewart. “I like being able to work on my own time. I take a theater course in the morning at Valley High. Everything else is virtual.”

Stewart will be attending Norfolk State University in Virginia next year.

“I want to study psychology,” she said. “I want to help people with mental problems.”

She loves her theater class after getting hooked on it her freshman year. She took a chorus course, which gave her the opportunity to sing and dance.

Ambreonia Garner will continue her education at UAB. She said that the health science courses she’s been able to take at Inspire Academy has motivated her to seek a career in the healthcare field.

“I have enjoyed participating in club activities in high school,” she said. “I have also enjoyed virtual school. It has allowed me to build strong bonds with my fellow students and teachers. I have also enjoyed taking a yearbook class at Valley High. Going to career tech has been a good experience. It prepares you for what you will be doing past high school.”

Garner said she’s proud of the fact the Key Club was able to help pay for a new sign in front of Valley High and for new 3-D printers.

Hazel Floyd is a junior this year at VHS. She’s been the Key Club’s co-president this year with Garner and will be the president next year. Floyd plays trombone in the Valley High band.

“I eat, sleep and dream band,” she said.

She wants to attend college after high school and to major in political science.

“I want to learn how people think on public policy issues,” she said.

After earning an undergraduate degree, she wants to go on to law school.

Floyd has taken enough dual enrollment courses at the Valley campus of Southern Union State Community College to and will almost be a sophomore when she starts college.

“I just got my driver’s license,” she said. “I am excited about that. I can now drive to school. I’m thinking about taking classes on Southern Union’s Opelika campus.”

Floyd has participated in both jazz band and concert band at VHS. She likes doing both but is a little partial to concert band, which will be having a performance at 6 p.m. Monday at the Community Center.

“These girls had no idea they’d be speaking today,” Weldon said. “They did great, didn’t they? Their membership in the Key Club has helped with their public speaking skills.”

Weldon added that Inspire Academy has given them a head start on going to college.

“They will be college ready, and that’s important to us,” she said. “They can earn a College Readiness Certificate.”

“I can’t say enough good things about him,” she said. “He’s a phenomenal person. He will be retiring at the end of the current school year. We would need three or four people to replace him and what he does.”

Weldon said that virtual education can be beneficial for those students who don’t like being at school.

“Mr. Creel is great in reaching these students,” she said. “He has a graduation rate of 95 percent. I asked him to head up our virtual program several years ago. He agreed to do it, and we started off with six students. He did such a great job that participation increased five times by the next year.”