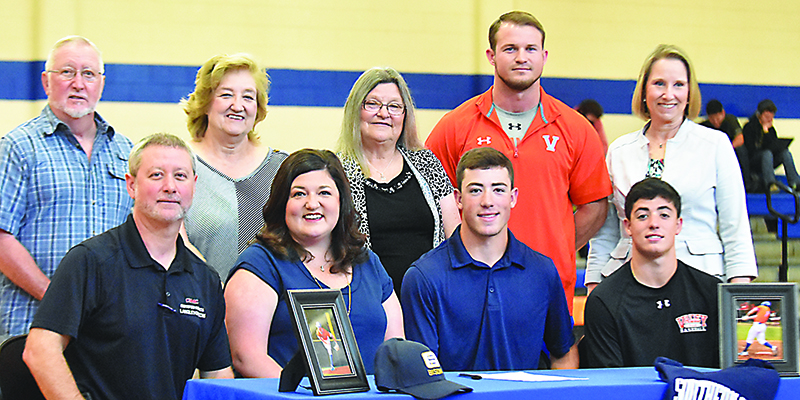 On Monday, Valley senior Will Kennedy put pen to paper, officially committing to continue his baseball career with Southern Union.

“I’m looking forward to reaching my full potential,” Kennedy said. “I don’t think I’ve reached it yet. I’m really excited that I can get my education paid for. It goes to show you that having good grades in the classroom can help you further your athletic career. That’s helped me and been a big part. I’m happy and proud of that.”

Kennedy will be a pitcher at Southern Union, where he hopes he can gain more velocity and become the best version of himself on the mound.

“I really just want to reach my full potential on the mound,” Kennedy said. “I really feel like I have some more to gain in velocity. I just hope that I can be a bulldog out there and get better.”

He could potentially see some time in the outfield for the Bison.

Throughout his high school career, Kennedy was a two-sport athlete, playing football and baseball for the Rams. This past season Kennedy was the starting quarterback for the Valley football team.

“Will is the epitome of a scholar-athlete. He does great in the classroom and on the field,” Valley athletic director and head football coach Adam Hunter said. “He is a two-sport athlete and has been a two-sport athlete his entire career in high school. He’s really put in the time and effort where he is today. We’re really excited for him.”

On the baseball team, Kennedy played all over the field, six different positions throughout the course of the 2021 season. He was also the Rams No. 2 hitter for most of the season.

Kennedy has been with head baseball coach Patrick Shivers since 2017.

“He’s been dressing out with the varsity since his eighth-grade year, and that doesn’t happen very often. We’ve only had two athletes since I’ve been here that have been fortunate enough to dress out as eighth-graders and actually get into varsity games,” Shivers said. “That just speaks to his athletic ability. We’ve talked for years about his athletic ability. He’s got a roof that he hasn’t reached yet. I hope when he leaves here and goes to Southern Union, I hope that he reaches and surpasses everything that I thought he could be as an athlete.

“I can’t say enough good things about him. Me and this joker are a lot alike. I see a lot of myself in Will from when I was a high school athlete, just the competitiveness and wanting to win and being unhappy with anything else. I thank him, I thank  his parents and all his relatives. They’ve been a huge support system in Valley High baseball the past few years. We’ll miss you.”

In his four years in high school, Kennedy had the opportunity to compete against a tough 6A region in football and area for baseball. That tough competition and playing with his friends were his favorite parts about his high school career.

“Some of the games this year in football were really competitive against some big schools. Those were great and pitching against some good teams,” Kennedy said. “Just playing with all my buddies. We’ve all been playing together for a long time.”