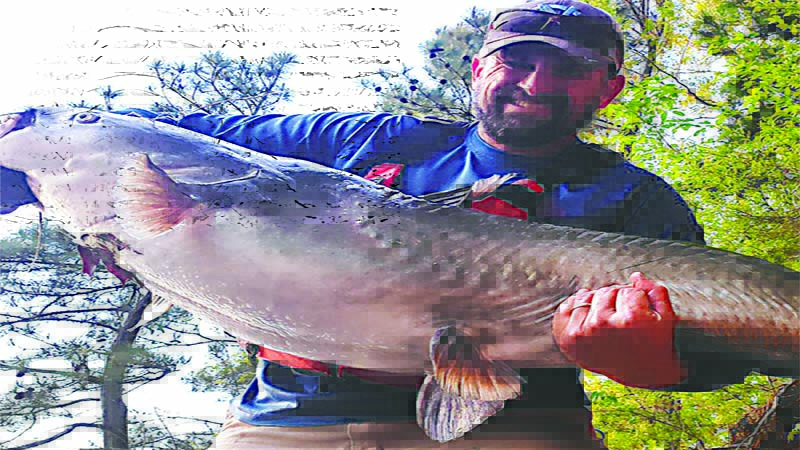 At first, April 18 seemed like a fairly ordinary Sunday to LaGrange angler T.R. Clark. After attending a service at Callaway Baptist, he decided to go fishing in the upper part of West Point Lake. It was a slow day.

“I guess I fished for probably six or seven hours. Well, no, probably five or six hours that day,” said Clark, who was just about to call it quits when one of his rods — a Santee rig — caught hold of something.

Judging by how the fish was rolling, Clark correctly guessed it was a blue catfish. What he didn’t know was that it would be a record-breaking catch.

After some fighting, he managed to pull the fish into his Feel Free Lure 11.5 kayak. But it was too big to weigh there. By the looks of it, Clark guessed the fish weighed 40 or more pounds. But when he weighed it on a nearby beach, he learned that it was a whopping 54 pounds. For context, the previous record for a blue catfish caught in West Point Lake, set in 2018, was 37 pounds and 5.44 ounces.

Though Clark is normally a “catch and release guy,” he decided to keep his catch.

“If I ever catch a trophy fish, you know, I’ll get some pictures and some measurements and then let the fish go,” he said. “But since this was a record-breaking fish … You have to go through a process to get the fish certified.”

Clark said he’s been fishing his whole life. For a while, he had to do it less for family and career reasons.

“I kind of slowed down when I got married, got a career,” he said.

In the last two-to-three years, he’s been able to fish more often.

“There are so many things to like about fishing,” Clark said. “It’s peaceful, it’s a chance to get away … It’s kind of away from the hustle and bustle of work and real life. It’s exciting to hook up with a really big fish … It’s a great way to pass the time with family and friends.”

To avoid wasting his catch, Clark and his family have been enjoying fish tacos.