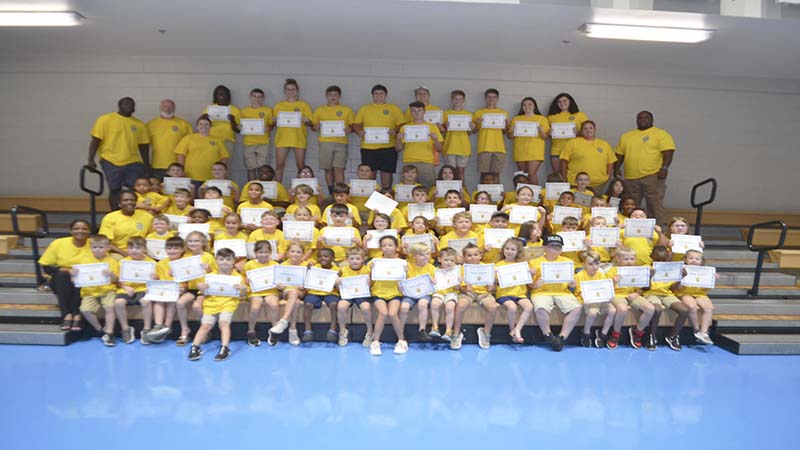 VALLEY — A total of 63 youngsters in the 5 to 11-year-old age group received certificates Friday morning at Valley Community Center marking their completion of this year’s City of Valley Junior Police Academy. The city’s incoming police chief, Mike Reynolds, thanked them for their interest in taking the week-long course and completing it on schedule.

Reynolds was the guest speaker at the 10 a.m. ceremony held inside the Community Room. He asked the assembled group what they liked best about the week, and got lots of different answers.

“Dodge ball!” some yelled. “The water sports!” said another, and “the eats!” said one youngster.

“I know you have had fun playing games and doing lots of different things,” Reynolds said. “You have also seen what our public safety officers can do. Officers always do the right thing, and you can, too. Just listen to that voice inside your head that tells you to do the right thing. Twenty years from now, you youngsters will be our leaders. Some of you will be wearing the uniform of a public safety officer or running for elective office.”

Reynolds told the youngsters he appreciated them taking part in this year’s Junior Police Academy and wished them a safe and happy rest of the summer.

“You will be back in school this fall,” he said. “We hope you do well, and we’d like for you to be back in next year’s Junior Police Academy.”

School Resource Officer Lt. Sandra Crim thanked the parents, grandparents and guardians of the children who took part in the Junior Police Academy. Many of them filled a section of seats on the left side of the Community Room. “We couldn’t have done what we did this week without our counselors. We are so grateful to you,” Crim said to much applause from the group of parents. “They showed these kids lots of love this week. When they fell and got a boo boo, it was a counselor who put on a Band Aid. It was a counselor who put on an ice pack when their feet were sore.”

Local police officers were thanked for the demonstrations they made for the children. Firefighters from the East Alabama Fire District showed them how they use emergency equipment; Sgt. Keegan Daniel, a K-9 officer with the Chambers County Sheriff’s Office, showed them how drug dog Otos goes through a search; Sgt. Wayne Hattaway of Valley Police Department’s Animal Recovery Unit talked about animal control; Sgt. Chris Davis of VPD showed them the operations of a drone and Chief Deputy Richard Carter of CCSO talked about flying a helicopter.