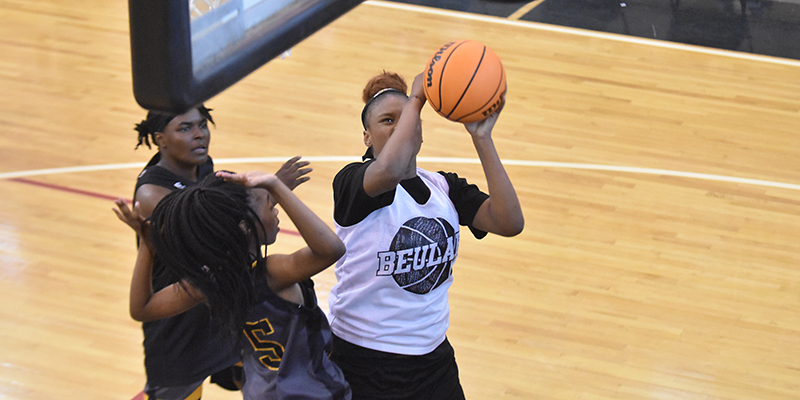 The Beulah girls basketball team has been taking steps the past few years, but the Bobcats took their biggest step this past season, finishing with a better than .500 record for the first time since head coach Sabrina Milligan took over four years ago. The team also won its first area championship in school history. Now, Beulah is looking to continue to build on its success with a full slate this summer.

“We had some decent inside play. It’s summertime, so I don’t have any of my guards right now,” Milligan said. “A couple of them are in summer school, so that is the most important thing is to get their grades up. Savanna Clements is hurt. She got hurt the first practice we had. My bigs, which are really my small bigs, they’re doing everything. They’re running the point and playing the four. I like it. We’re playing pretty good defense. We have some things we need to work on, but we have some things that we already look better at.”

Milligan said the Bobcats were focusing on — and seeing improvement — in the inside play of their bigs. For the past two seasons, Beulah has scored most of its points off of fastbreak opportunities. On Friday, the majority of its points were scored inside the paint after setting its offense up.

Due to a lack of guards, the Bobcats relied on their rising seniors to handle the ball for the most part, though some younger girls also had some touches. Milligan believes that the experience of working with the bigs as ball handlers in the summer will help moving into the season.

“I tell all of them all the time that we’re all guards, some are just bigger than others,” Milligan said. “We all do the same dribbling drills, so they have to know how to handle the ball. You have to be able to make smart decisions and handle it when someone puts a little bit of pressure on you, so it’s a great experience for us. For the most part, they’re doing alright, bringing the ball up the floor and making good passes. When we get a couple of ball handlers in there, I think we’ll pick up where we left off.”

Friday was the first of four playdates that Milligan has scheduled for the summer. These summer games give her an opportunity to coach the team in game time situations where they can learn without having to worry about the final score affecting the team’s season, something they missed last year because of COVID-19.

These games are crucial for a young team like Beulah that has just two seniors on the roster heading into next season.

“We’re trying to get back into the swing of it. That’s huge because we’re playing teams that we normally don’t see in the regular season,” Milligan said. “It’s a big challenge to step up and play these teams.”