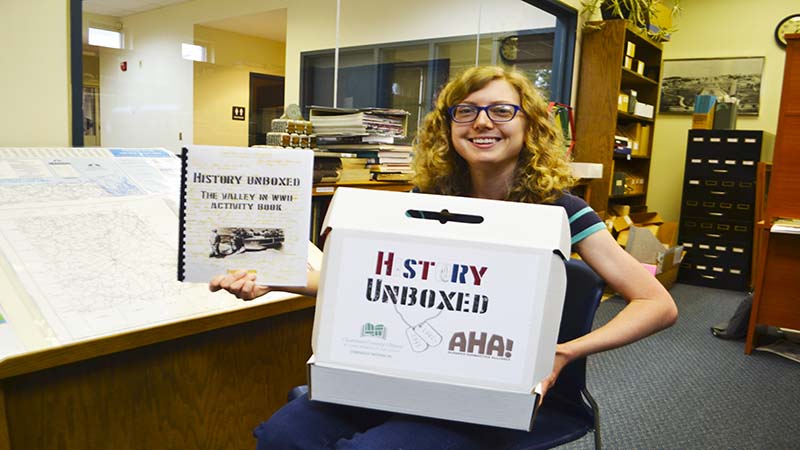 VALLEY — Bradshaw-Chambers County Library has a couple of fun ways people can learn about the Valley area’s involvement in World War II. This year marks the 80th anniversary of the U.S. involvement in that war. It began with the Japanese attack on Pearl Harbor on Dec. 7, 1941. Two programs relating to the U.S. in World War II are being offered this summer. There’s an Online History Club that’s open to all age groups and History Unboxed that’s for those in the 8-16 age group.

“In 2019, we had a history club as part of our summer reading program,” said archivist Robin Watson. “It was a way for youngsters in the summer reading program to get interested in the Valley’s role in World War II. We did it again last year but because of COVID-19 had it online. We will be doing it again online this summer, and there’s no age limit. It’s open to anyone who has an interest in the subject.”

It will be an opportunity to do some time traveling back to the early 1940s and to see what life was like during the period. Participants can earn electronic badges and tickets for online prize drawings by watching short videos and presentations. Participants complete the activities in the challenge and email their answers to receive a secret code. Registration for the History Club is being done on Beanstack. Go to chamberscountylibrary.org for details.

There are seven activities: one on the War Service Centers, one of reading a book about World War II, one on President Roosevelt and his visit to the Valley on March 30, 1939, one on a secret bullet factory in the Valley, one on the Tuskegee Airmen, one on life on the home front from 1941-45 and one on the library’s own Sarge and Scrappy.

“We are really excited about History Unboxed,” Watson said. “It’s a little different from anything we have done before and is being funded by a grant from the Alabama Humanities Alliance. We have 40 boxes for this. A number of youngsters in the 8-16 age group have signed up for it. We would like for all the boxes to be used.”

History Unboxed is a self-paced program that allows the youngster to engage with local history through fun activities. Those who complete an activity book by July 23 will receive a free t-shirt from the World War II Museum in New Orleans. A brief form is available on the library website where youngsters can sign up for the program.

Participants will see videos about the secretaries of the War Service Centers and about President Roosevelt’s visit to the Valley. They will learn about the service of such local men as Tyre Weaver of River View, who was badly wounded while on a bombing mission over Germany, and Milford Williams, who served on a tank crew. There’s a link where they can see videos about local men who served in the war and those who served with the Tuskegee Airmen.

The History Unboxed activity kit includes a custom-made activity book with local photos and documents, World War II postcards, a book entitled “I Survived D-Day” and many momentos relating to World War II. Children taking part can learn about how life in the Valley changed during the war and how ordinary people helped in extraordinary ways to win the war.

“We want to make learning history fun for them,” Watson said.