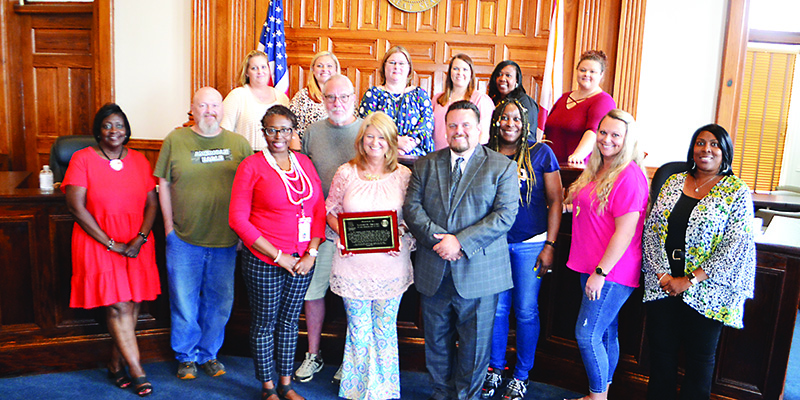 LaFAYETTE — Friday was the final day for Nannette Brooks as the chief clerk in the office of Chambers County probate judge. She’s retiring from the county government after seven years of service and plans to spend more time in the ministry. She has been at the Standing Rock Methodist Church since 2017 and is now planning to also be at Sweet Home Methodist near Ward’s Mill.

At 2 p.m. EDT on Friday, Brooks was honored at a retirement reception held inside the historic courtroom on the second floor of the Chambers County Courthouse. She thanked former Probate Judge Brandy Easlick on having hired her in 2014 and current Probate Judge Paul Story on having retained her in her chief clerk’s role.

“I thank Brandy for giving me an opportunity,” Brooks said. “What I learned from her was invaluable. I was fortunate to have served under two fantastic probate judges.”

Brooks came to county government after 28 years with Spectrum Stores, where she served as marketing and advertising director. She still remembers Spectrum’s trademark slogan: “Get it fast, get it fresh, the price is always right and you get it with a smile at Spectrum.”

Spectrum stores are now under the Circle K brand.

Story thanked Brooks on helping him ease a transition from the medical field to the probate judge’s office two years ago.

“We have had some hectic days where we may fuss and fight a little, but at the end of the day we loved each other,” he said. “We are much like a family here in the probate judge’s office and that in no small measure is due to her. I am thankful to be here today and to have seen you grow in your ministry.”

Brooks also thanked Sheriff Sid Lockhart for his help in getting her to the courthouse. When she was in between jobs after leaving the convenience store business, Lockhart told her about an opening in the probate judge’s office. She interviewed with Easlick on a Monday and was offered the position on a Friday. She was somewhat reluctant to take the job at first, hoping to find another position with better pay. She decided to take it and has never regretted it.

“You should never make a decision based solely on money,” she said.

She wished the new chief clerk, Chasity Foreman,  good luck in the job.

“She could be one of the best chief clerks we’ve ever had here in Chambers County,” she said.

“Support one another, love one another and put up with the squirrels,” she told her staff. “Support Paul and help keep him straight. Each one of you has a different personality and skill set. You will always be a part of my life, and I will always keep you in my prayers.”