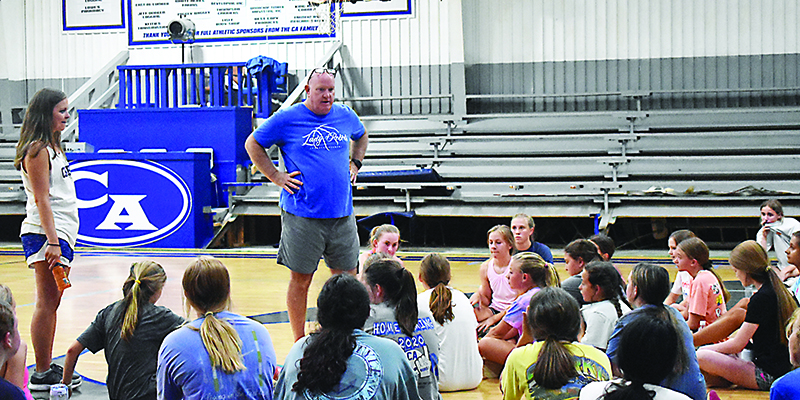 In June of 2020, girls basketball head coach Jeff Hines and head softball coach Jon Owens wanted to build a foundation for the girls’ athletic programs at Chambers Academy. They put together a circuit workout that would help the girls get stronger and increase their endurance during the sporting events.

Monday was the program’s first day of summer workouts. The 90-minute workout had seven different stations inside the gym. The girls would rotate after 90 seconds of workouts at each station, completing each drill once in a cycle of the circuit. The circuit was completed three times. After the circuit was finished, the girls ran six sprints, broken up into age groups (meaning the sixth graders all ran with each other, followed by seventh graders, freshmen, etc.).

“I love to be around these girls, they work tremendously hard,” Hines said. “I love watching the sixth graders that we have. We have six of them that are getting broken into what we’re doing here, watching our seventh graders flourish a little bit because they understand. Our seniors, they’re awesome and they’re really going to lead this group of girls all the way to their grade.”

During the 2020-21 school year, the Chambers Academy athletic teams reached a state championship in volleyball, went to the state quarterfinals in basketball and finished third in the state tournament in softball.

“It’s like I told the girls [on Monday], we have to keep grinding. We lost in the state championship game in volleyball, went to the [quarterfinals] in basketball, finished third in softball and cheer is yet to be determined since they go in two weeks,” Hines said.”We have to continue to work to get us over the hump. We can get there, we have the pieces to get there, we just have to put in the time. These girls work hard and it’s going to help us. They told me [on Monday] there is a major difference going into last year.”

While in some past years, the girls’ teams have had summer workouts but once the school year started, the workouts stopped. This past school year, Chambers Academy had a workout class so the girls could continue to develop during their sport and outside their seasons.

“It helped a lot and we did it after school, so we maintained our strength throughout the year,” senior basketball player Lexi Smith said. “It helped a lot with me being able to stay focused and be stronger with my shot. My shot was way easier and I felt a lot stronger running. I felt faster because we worked a lot on our legs.”

This year the workouts have gotten off to a better start than last year, now that the girls have a full year of experience with the workout plan.

“Last year, we started off really sluggish because we didn’t know what to expect. Everyone wasn’t prepared for it, but this year everyone is doing really good with it,” Smith said. “I think we’re going to be a lot stronger than last year. We have a lot of girls that are working hard. We did a lot better today than we did yesterday, [becuase] usually, Tuesdays are bad. I believe that it’s helped a lot in sports this past year. I believe that we’re going to be way better this year.”