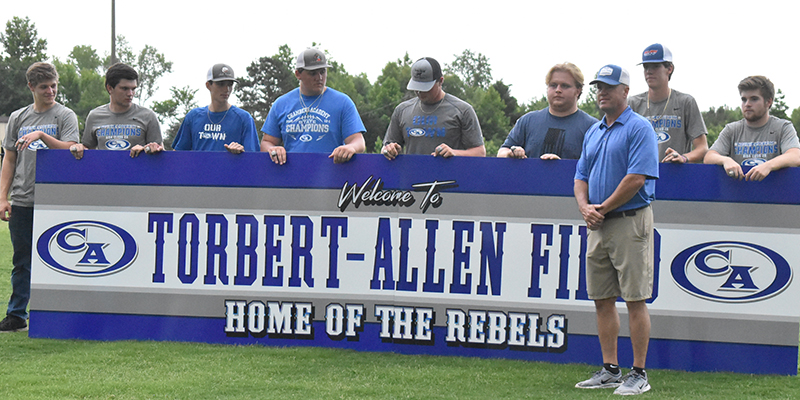 Jason Allen has had a lot of memories at Torbert Field, but June 9, 2021, will stand out forever.

While Allen believed the fans were there to celebrate just the team, he was surprised by Calvin Milford during the ceremony. Milford started reading off different milestones that Chambers Academy football has accomplished in its 50 years as a program. At the end, he informed the crowd that the team’s 51-20 win against Edgewood on Nov. 13 was the final game played at Torbert Field. When the Rebels play their first game of the season in August, they will play at Torbert-Allen field.

“I don’t feel deserving because there’s a lot of great people that prepared this and a lot of great players, coaches, teachers and administrators,” Allen said while trying to hold in his emotions. “I’m in awe. Thank you for making Rebel football what it is. We’ve done this together. You showed up, and we worked hard. We’ve won some games and God has been good to us. I think it’s important that we remember in the good times and in the bad times, who we need to give credit to. We need to stay humble and keep working and be grateful. This year was probably the greatest year of my career, and God has been good to me.

“I appreciate this place because it’s home, and you don’t work any harder for anyone else than you do at home. I’ll always do my best for this place and try to represent you. Thank you board for this tremendous honor.”

“It’s unbelievable that something like this could happen in my career, and I’m still coaching. I’m flattered. That’s no small feat,” Allen said. “I’m just thankful to the CA family for all that they have done to support my program. I’m just thankful that I have the opportunity to coach the Rebels.”

Each player received a championship ring after the 12-1 season that the Rebels capped off in Montgomery, winning its second state championship in three years and its first 2A State Championship in school history.

“Tonight, we are here to celebrate an extraordinary group of young people, who despite unforeseen obstacles and adversities and unprecedented times, chose to preserve and overcome what a select few get to be called — state champs,” Allen said. “The 2020 season was one for the ages and one that will not be forgotten for a long time. The way our young people and our community rallied together to be the best that they could be is surely a tribute to our school, our families and our people. The pride that is exemplified in the CA on Friday nights and in our program is second to none. There’s simply no greater place to play than the C and the A.”

The Rebels outscored their opponents 577 to 176.

The graduating senior class had five players selected to the AISA All-Star Game, with Payton Allen claiming the MVP award. He was also later named the AISA Back of the Year. In the past three years, the 2021 senior class finished with a record of 36-3 with two state championships while playing for a third in those years.

In the state title game, Chambers defeated Escambia Academy 36-34 in a tightly contested game. In that November game, Chambers gained more than 500 yards of offense, converted nine-of-14 on third down and two-of-three on fourth down. Chambers also recovered two onside kicks (one kicking and one receiving) in the game.

Throughout the season, the Rebels defeated four of the six teams competing for a state championship, excluding Glenwood and themselves.

“There’s definitely a case to be made that the Rebels were the kings of the AISA,” Allen said. “They were the best, and they knew they were the best. They loved each other, trusted each other and showed the rest of the world that our town was the place to be.”