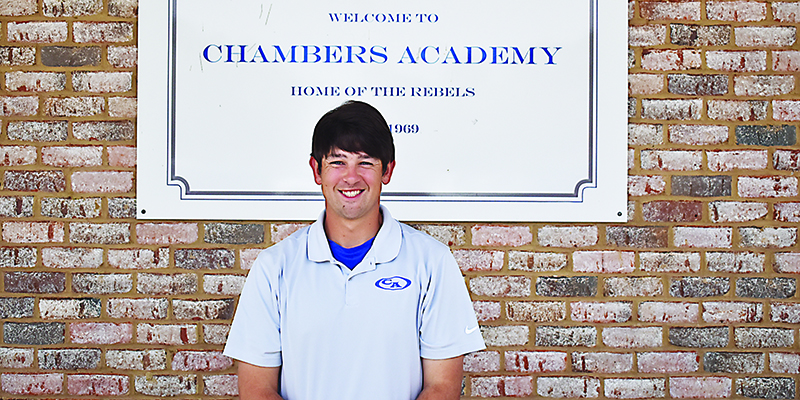 The Chambers Academy baseball team had one of its best seasons in school history. The Rebels finished with a program-best 26-9 record and advanced to the second round of the AISA baseball playoffs.

Because of the program’s record total of wins, head coach Dillon NesSmith was named the Valley Times-News Baseball Coach of the Year.

Since NesSmith took over as the head baseball coach four years ago, the Rebels have been a threat in the AISA. Two years ago, Chambers reached the state semifinal. In 2020, NesSmith’s team was a favorite to win the 1A state championship game before the season was cut short.

Chambers jumped up to 2A this season and was one of the top five 2A teams in the state.

The Rebels won tournaments hosted by Morgan Academy and Hooper Academy this season.

“Those two tournaments and just being with the kids all day long,” NesSmith said of his favorite parts of the season. “You’re out there all day and you get to see what the kids are made out of. Hopefully, we can continue that within the next couple of years.”

Reflecting on the season, NesSmith said the fact the Rebels were able to play an entire season was big, especially after having the season cut short a year ago due to the start of the COVID-19 pandemic.

“We’re very blessed because last year we weren’t able to finish the season, and I hated it for those seniors. It didn’t end the way that we wanted to, but at least we had the opportunity to go out there and compete for that chance,” NesSmith said. “That’s better than just living in the unknown like we did before. I really hated it for those kids. They were upset that we lost, but at least we got the opportunity to go out there and compete, and we competed well. We played hard, and that’s all I ask from them.”

Most of the Rebels baseball players also are on the football team and NesSmith serves as that team’s defensive coordinator. Having that extra time to build a bond before moving to the diamond has helped NesSmith as a baseball coach.

“Being at a small school, most of these guys play three sports. I would say 85 percent of the guys in the high school play football, so it’s definitely a brotherhood,” NesSmith said. “It’s something that I wouldn’t trade for anything. I treat these kids like they were my own. They’re a lot of fun, and they keep you young. It’s been a real honor with this past senior class, and it’s going to be a lot of fun with this next senior class as well.”