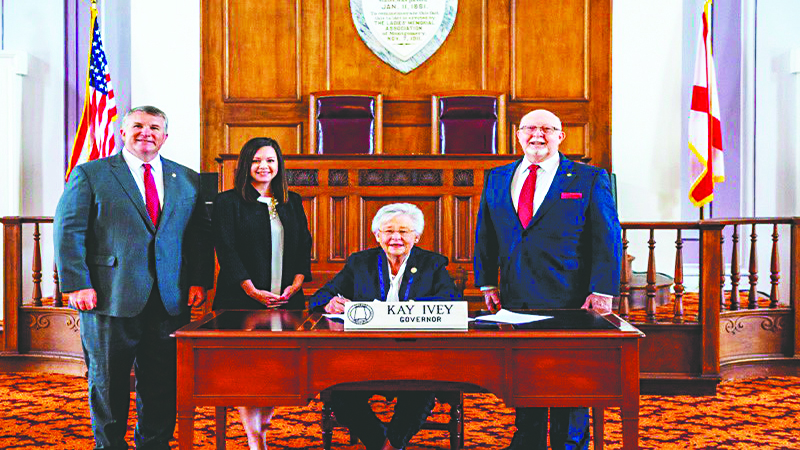 On Friday, Gov. Kay Ivey signed into law three bills sponsored by Senator Randy Price, including a bill to establish a lifetime concealed carry permit, a bill to require the Emergency Management Agency (EMA) to adopt guidelines for identifying and designating safer shelters throughout the state and the Alabama State of Emergency Consumer Protection Act.

“When I was first elected to serve in the Senate, I made a promise to uphold the rights of the citizens in my district and these three pieces of legislation that have been signed into law are examples of me keeping my word,” Price said in a press release. “I will always stand up for what is right and fight for common-sense legislation that will move my district and our state forward. I appreciate the collaborative work that took place between my colleagues in the Senate and House to get each of these pieces of legislation where they needed to be, putting the best interests of our people first.”

Price sponsored SB 308 which allows Alabamians to acquire lifetime concealed carry firearm permits and avoid the inconvenience of traveling to the local sheriff’s departments for frequent renewals. Representative Proncey Robertson carried the legislation in the House. This bill will streamline the permit process so it is handled in the same manner in each of the 67 counties rather than the varying processes that are currently in place. One-year and five-year permits will remain available.

“I want to thank Representative Proncey Robertson for carrying SB 308 in the House. As your senator, I will work to advocate for and strengthen the protection of our Second Amendment rights. I will always fight to protect our conservative values and morals,” Price said.

The bill also allows law enforcement officers to better protect our families by providing them with tools to identify convicted felons and other individuals who were required to surrender their gun rights after judges ruled that they pose a danger to the public.

Per the press release, a number of groups ranging from Alabama sheriffs, local district attorneys, the National Rifle Association and other gun rights advocates were consulted as the legislation was drafted and progressed through the process and their input was incorporated into the final version of the bill.

“I nor my colleague Representative Joe Lovvorn will ever forget the devastation and tragic loss in Smiths Station and the Beauregard communities due to the deadly tornadoes that struck our state in March of 2019,” Price said. “Seeing this destruction firsthand has stuck with me, and I wanted to do even more to help protect the citizens not only in my district but statewide during severe weather season. Alabama is home to tornado outbreaks every year. This bill will help county EMAs to provide storm shelters across the state during severe weather. I want to thank Rep. Lovvorn for his leadership and carrying SB 43 in the House.”

This bill put specific guidelines in place for storm shelters across Alabama allowing county EMAs to create additional shelters. The minimum guidelines include providing local EMAs with methods for notifying the community about safer places during severe weather events, providing an application process for those offering a safer place facility and requiring safer place facilities to satisfy building codes including a second exit, smoke detectors and sufficient sanitary facilities.

“I am also proud to have sponsored SB 39 which establishes the Alabama State of Emergency Consumer Protection Act. I have heard many horror stories of when a community is hit by a natural disaster, whether it is a tornado or hurricane and it results in home repair frauds that occur way too often,” Price said. “During this difficult time and situation, people are unfortunately taken advantage of and fall victim to home repair fraud and scams. This piece of legislation will hold those accountable and create criminal penalties.”

This bill creates the crime of aggravated home repair fraud to provide enhanced criminal penalties for home repair fraud committed for the repair of a residential structure that was damaged as a result of an event that was declared a state of emergency by the governor.