LaFayette football aims to ‘protect the brand’ heading into 2021 season 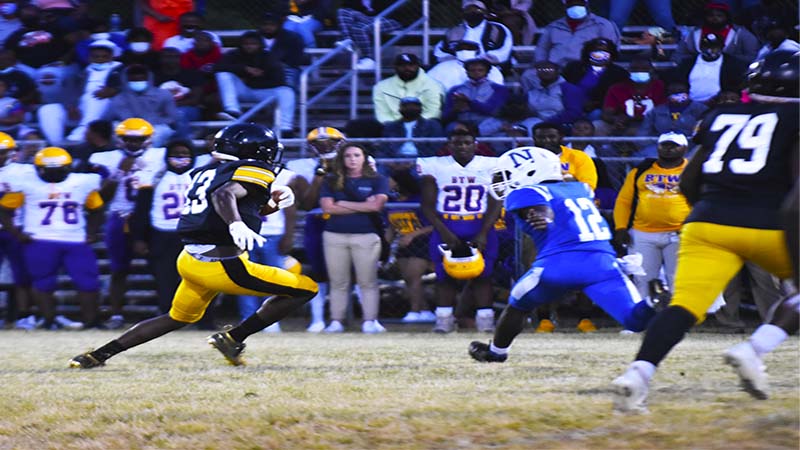 LaFayette rising junior Joshua Combs cuts back against a Notasulga defender in the four-team scrimmage game in May.

In his first year as head coach, LaFayette head coach Juan Williams led the Bulldogs into the playoffs after a tough 0-4 start to the season. After his first season, Williams and his coaching staff knew that they had to get the 2021 team mentally and physically stronger for one of the tougher regions in 2A.

During their 10-day spring season, the Bulldogs showcased the steps they had taken in getting stronger. Now during the summer, Williams is hoping they can continue to build upon that success.

“Right now, everyone is buying in,” Williams said. “They understand the second summer is going to be a lot harder. We’re trying to get to a point that we feel we can contend. That’s going to be the thing over the summer is can we contend and can we get stronger as individuals so that we can thrive in this region that we’re in. We’re trying to get in just like last year but our guys have to be stronger and faster. We understand that now. Right now, it’s great that we’ve been able to get back out here early, so they can start and we can see guys what they can do right now and have that next month or two to evaluate better.”

The team motto this summer is “protect the brand,” which is a way for Williams and his coaching staff to instill more pride into the program and help the players achieve their dreams of playing college football.

LaFayette will be led by its five seniors this season, three of which have the potential to play at a high level at the next level. One, Antavious Woody, is currently a three-star player with more than 15 Division 1 football offers. The other two are drawing attention as well.

“We don’t have a big senior class, but those guys are working hard. We’re just trying to instill in them leadership, so they’ll lead and the rest of our kids will follow,” Williams said. “But we want everyone to lead. If we can get everybody leading in their aspect in that umbrella, it’ll be great.”