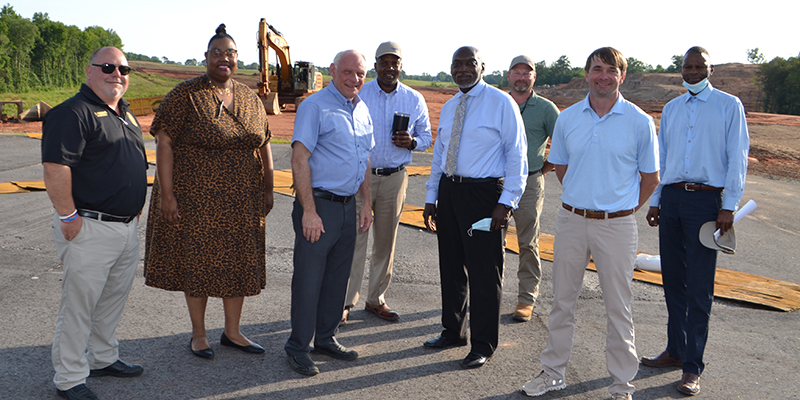 LANETT — Ryan Pearce has been working on a master plan for the Lanett Municipal Airport since 2008. It has succeeded all his initial expectations, and he now thinks it should have the designation of a regional airport.

According to the Federal Aviation Administration (FAA),  a regional airport has a relatively high level of activity with some jets and multi-engine propeller aircraft.

Pearce is a civil engineer with Goodwyn, Mills & Cawood, Montgomery, and has been a consultant with the Lanett airport for some time. When the airport closed in 2018 to build a new runway, the plan was to bypass the old 3,100-foot runway in favor of one that was 4,400 feet in length. That part has been completed. An additional construction phase that’s now under way will add an additional 1,000 feet, bringing the total length to 5,400. That’s longer than the current runway in Auburn, making it one of the longest in east Alabama.

A runway more than a mile in length opens all kinds of possibilities, and local leaders believe the presence of a $1 million terminal gives Chambers County an important edge in the recruitment of new industry and business. Before the current calendar year is out, Lanett will have the only airport in the state where business executives can walk directly from their plane into an economic development office, as the Chambers County Development Authority is now located in the terminal. Business class jets will be able to land on the new runway and taxi up to just outside the new terminal.

Late Tuesday afternoon, the Lanett City Council held a work session inside the new terminal, and Pearce provided an update on runway construction and the possibilities for the Lanett airport when all the work is done.

“I get excited when I talk about this,” Pearce said. “We still have a good bit more work to do. As you all can see, the new terminal is a great addition. There’s a spacious lobby, a pilot’s lounge, a flight planning room and this conference room we are meeting in today is really nice.”

“I talked to one pilot who told me they are talking about our airport in Atlanta,” he said. “They are looking for hangar space everywhere, and with Lanett being less than 90 miles away from Atlanta they are considering coming here. We have had at least 10 pilots and owners of planes coming here to talk to us about having a hangar here.”

“We are getting close to a million yards of dirt being moved,” he said. “We have had to work around wetlands and brought in over 3,800 dump truck loads of sand to help deal with that.”

Plans call for a parallel taxiway to run from one end of the new runway to the other.

“When we went to Washington, D.C. to talk about this project, we have talked about an entrance road being a transformational feature to the project,” Pearce said.

A grant for up to $6.7 million could be sought for this new road. It could either lead from Phillips Road to the airport or could branch off the road leading to Norbord. This new road could open up the possibility of an airport-related industrial park being located between the runway and I-85. The city owns several hundred acres of land in that area. With interstate visibility, it would be an excellent location for aviation-related business such as paint shops, engine repair facilities and places where aircraft can be refurbished. There’s also the possibility of an aviation subdivision. “Some people into flying like to live just off a runway,” Pearce said.

The present work under way at the airport is being funded by a $8.5 million 100 percent FAA grant. Senator Richard Shelby was a key factor in getting the grant approved.

Pearce is optimistic that a 100 percent grant will be approved for the new road.

“We are working with grant writer Louise Campbell with this,” he said. “We will have to have an environmental assessment on the impact a new road would have. This will affect where it will go.”

Mayor Kyle McCoy said the council will act on a resolution applying for the grant and an environmental assessment. “It will get across that we support it, and that it’s a high priority for the local area,” he said.

Pearce said that the mayor and council had been very supportive of what he’d been doing all along.

On the conference room TV, Pearce showed a drawing of an overall master plan for the site. It showed the terminal plus the other existing buildings on the site, the new road coming in on the back side, the runway and taxiway and hangars going up to the left of the terminal.

The city stands to gain revenue from the rental of hangar space and the sale of aviation fuel. A hill outside the terminal was being graded while the meeting was underway. The site needs to be leveled for hangar construction to begin.

The illustration showed up to 15 hangars on the site.

“Both jets and turboprops can go in them,” Pearce said. “If you have a $3 million plane in one of them, that will help you with local taxes.”

The dirt that’s being moved will be used in the runway project. There’s been a lot of that taking place on the 654-acre site. When the terminal opened late last year, there was a hill just outside the building that blocked a view of the runway. That has been removed and the runway can be plainly seen.

Work will soon begin on the 1,000-foot extension. There is an area on the extreme southwest side of the runway where some blasting will have to take place.

“We will notify nearby residents before we do it,” Pearce said.

Around 8,000 and 10,000 yard of rock will have to be removed. New fencing will also be going up around the airport when the work is completed.

“We are working on a 20-year plan,” Pearce said, “but we could get all the work done in five years.”

Pearce said the new airport will be capable of handling many different kinds of planes. He said he thinks a C130 cargo plane could safely land there if it had to but doesn’t expect that to happen.

“We will be able to land any size corporate jet, and that will be good for this area,” he said.

The new airport could serve as an alternate site for the busy airport in Auburn.

Pearce said a neat lighting system will be installed.

“It will be an efficient LED system and can be turned on by a pilot before landing,” he said. “He can control this from his radio. The lights go off after the plane has safely landed.”