Roadwork on State Road 108 in West Point on the horizon 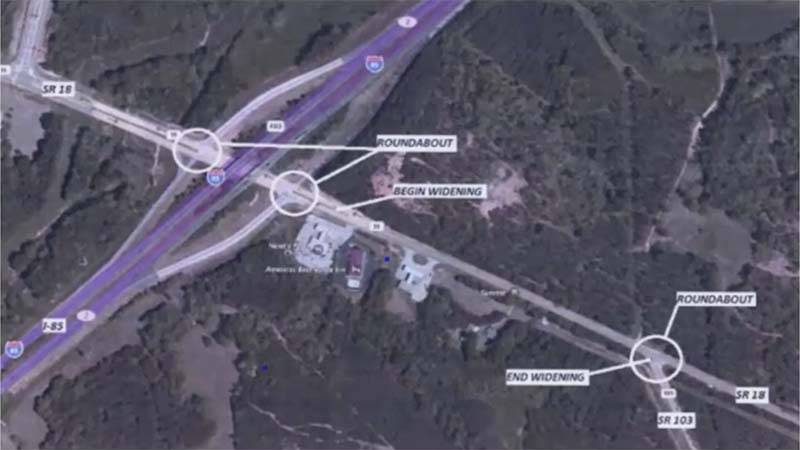 “The justification for this project is twofold; efficiency and safety,” Brooks said. “This interchange has a history of crashes and particularly rear-end crashes and angle crashes. The great thing about roundabouts is they are designed to handle both of those situations. And throughout much of the state of Georgia, where we have put roundabouts in intersections that have had angle and rear-end crash situations, we’ve seen dramatic reductions of incidents.”

The next project will be west of the interchange on State Road 108 at Long Cane Creek, where GDOT will replace both east and west-bound bridges.

Brooks says the plan is to combine the projects and have them overlap to minimize the impact time.

“We’re going to combine them, have them overlap, and do them simultaneously. That way the impact is condensed into one period of time rather than having an impact for one project and then having the impact for another project,” she said.

Brooks said the bridge replacement will be done one side at a time so that traffic can keep moving during construction.

Age of the bridges, Brooks said, is the primary justification for this project.

“The bridges were built in the early 60s and up to modern design standards, they just do not meet what we would want to see in bridges nowadays,” Brooks told the viewers. “So we’re going to bring them up to modern specs. And while they’re in fair condition, currently, we would just feel better about replacing them while we’re doing this other project. They will be set to go then for decades to come.”

The two projects were awarded to CW Matthews Contracting for a total of $16 million and they are currently awaiting the notice to proceed.

“Once our office gives the contractor the notice to proceed, then they can basically spring into action,” Brooks said.

Brooks also said CW Matthews has already begun to stage in the area in anticipation of the notice to proceed. Once they have that in hand, clearing will begin the first phase. Utilities look to be laid in late summer and then visible construction taking place in the fall of 2021. GDOT expects completion of the project in the Spring of 2023.

Brooks assured the residents that at no time during this project would there be a full road closure at this site. She said GDOT engineers and consultants have had ongoing collaboration with Kia Georgia to develop alternate routes for workers and suppliers traveling in and out of the manufacturing plant.

“You know, in some cases, we’re just saying go up to exit six, and you can’t go far wrong,” Brooks said. “Our engineers have timed everything and it really only adds 10 minutes to most commutes to go to that extra exit and come back around. But we do have alternates in place for the folks at Kia.”

For commercial traffic, Brooks says she recommends using a GPS enabled app to navigate the area while the project is taking place.

“I recommend using a GPS app because they will automatically reroute you as needed,” she said. “Now, if you don’t wish to use an app, you’d like to make your own route but you need to talk to somebody about what’s the best way to do it. 511 Georgia is a free service and it uses the navigator system. We have operators standing by at all hours. You call them and say hey, here’s the direction I need to go into. I’m starting from this point, I’m going to this point, can you help me find a good route that will avoid this project? They will be happy to do that.”