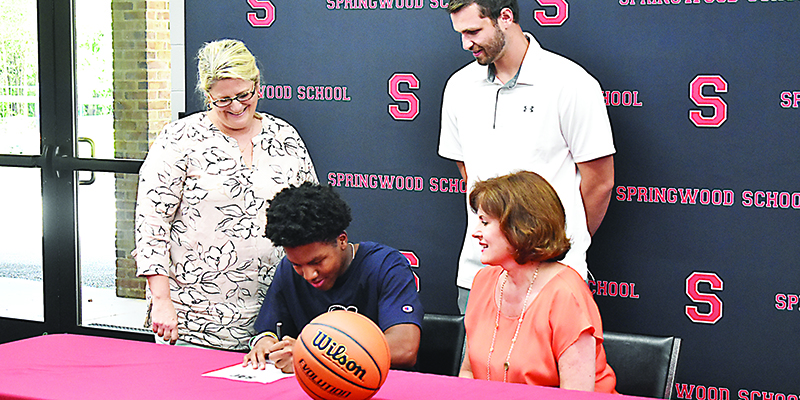 After struggling to adjust to the way basketball is played in the United States compared to the United Kingdom during his junior year, Springwood’s Tyrese Ferguson made a few adjustments to his game and worked hard during the summer to get ready for his senior season, which resulted in a trip to the AISA quarterfinal round of the playoffs and a scholarship to Texas Wesleyan University.

He signed his scholarship offer on Monday.

“What stood out about Texas Wesleyan was first their record. They’ve won many championships, and they always have a clean record. Last year, they were 21-9,” Ferguson said. “The coach was really cool. He thinks it’s cool that I am from the U.K. He feels like I am a really good fit for the team and can bring some culture to the team. Because I’m a big guard and I’m in everyone’s face, he feels that is a great fit for his team.”

Expected to join Ferguson at Texas Wesleyan will be his former teammate Francis Okeyia, who played in the United Kingdom with Ferguson during Ferguson’s first year at Springwood. Okeyia played his freshman year of college at Brescia University in Kentucky.

“It’s really good that I’m going to get a chance to do that at a college level,” Ferguson said. “We’ll be a lot more smooth on the court and get a lot more exposure.”

He trained with Okeyia and made trips to Atlanta, where he worked with a trainer and several local basketball players, refining his craft.

“Because COVID happened, our soccer season got cut short. My plans for the summer were to work out with Francis and stay at Springwood for most of the time and really get better for next year because I really wasn’t myself last year when I played basketball,” Ferguson said. “I wanted to come back this year not just being known as Francis’ guinea pig and shadow. I wanted to be a better player and make my own path. I wanted to show that I am a way better ballplayer than people thought I was during my junior year. He pushed me out of my comfort zone to become a better player than I was before.”

Ferguson made an incredible jump, increasing his scoring average to 13.4 points a game and 9.4 rebounds a game. He led the team in double-doubles, finishing with eight and was selected to the AISA All-Star game.

“It was amazing to watch Tyrese’s transition from his junior to senior year,” Springwood Head of School Lowrie McCown said. “You worked really hard over the summer. One of the things that I want to tell you is that you have to keep working like that between now and your freshman year. You have to work like that every year because you’re going to keep getting better and better. You guys, along with coach [Lisa] Sampson, have helped get men’s basketball on a winning cycle. We’re really proud of you and happy for the schools that you are going to and signing to.”

While he grew as a player, head coach Lisa Sampson pointed out that he took on a leadership role, leading the Wildcats to the quarterfinal game.

“You think back to your junior year and what you did, kind of buying into what me and coach Mike [Jenkins] were trying to teach, it wasn’t always pretty,” head coach Lisa Sampson said. “You stuck with it and during the summer you worked your tail off. You had a great senior year and were an [AISA] All-Star. More than that for me, you were a huge leader. You brought everyone together.”