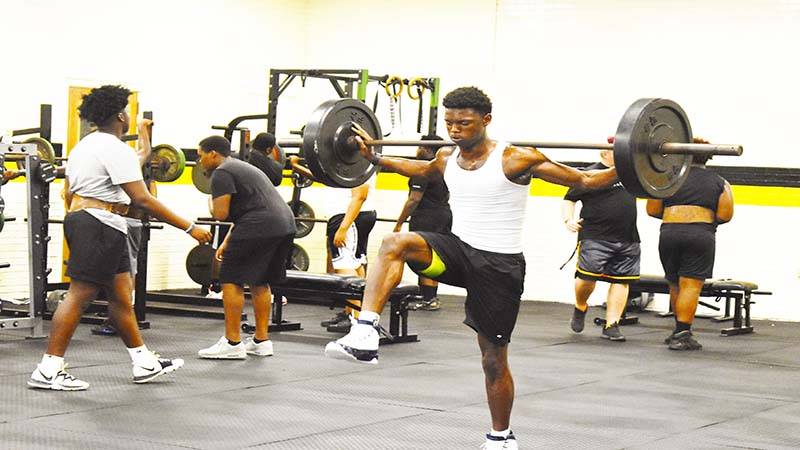 LaFayette head football coach Juan Williams was hired about two months before the start of the COVID-19 pandemic. Though he was with the team during the summer, like other coaches, Williams had to change the way his summer season was handled.

Because the pandemic forced his schedule to change, Williams is treating this offseason as his first year with the Bulldogs. So far, he’s run his normal spring and summer practices and workouts.

While it reached the playoffs a year ago, LaFayette struggled to get a footing early in the season. It had the talent to compete with its schedule but usually had the game slip away in the second half due to a lack of depth and costly mistakes.

With a full season of gauging the team, Williams and his coaching staff are finding solutions to 2020’s problems by hitting the weight room and building depth.

“It’s going well. As a coach, you always think you can do better,” Williams said. “We’re seeing what we need to do and our coaches are pushing these kids to a different level than they’re used to. Right now, we’re seeing if they’re strong. Right now, that’s the name of the game. Being bigger, faster and stronger is something that we’re trying to do. That’s the key. We’re trying to put a little football in them too. That’s something that we didn’t get to do last year a lot is put grass under their feet.”

This season, LaFayette has a couple of seniors that will have an opportunity to play football at a college level. So far, Antavious Woody, who is a four-star prospect, has been to several key camps that have increased his exposure. Vinay Singh has also been to several camps as his name starts to gain some recognition among coaches at the next level. While they are two of the older players attending camps, younger players are also participating in college exposure camps.

“Right now, we have a lot of kids going to individual camps and letting them get some exposure,” Williams said. “It’s great for all of them, even if they’re not going to play ball. You want them to go experience something different, even to the kids that are going out to the stadiums and getting some touring in, it’s great for the average kid that wants to see something different.”

The Bulldogs hosted a spring playdate, showing their fans the several steps that the team had taken since the end of the year.

Now, LaFayette will hopefully take part in its first seven-on-seven scrimmage this summer on Thursday, depending on if their helmets arrive in time to participate in the scrimmage at Auburn University.

“It’d be great to have our first seven-on-seven,” Williams said. “It’s another level of competition. We’re trying to get our kids to compete and learn how to compete and learn how not to get down on themselves. We have to get to a certain level of how we compete. When times are tough, will we compete? The only way you know how to do that is if you keep competing, especially against other people besides yourselves. We just want to see our kids compete against kids from other schools.”