Trammell aims to put offseason work to use during 2021 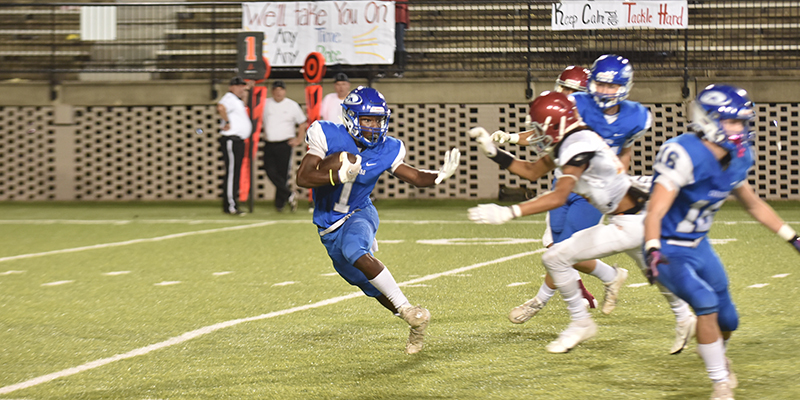 During the 2020 season, TY Trammell dazzled for the Chambers Academy football team, using his speed and quick-cutting ability to finish with the second-most receiving yards in the AISA.

Last season was Trammell’s first year as a Rebel, as he transferred in during the summer from Valley. In his two years at Valley, Trammell was a defensive back only, playing mostly cornerback. When he transferred to Chambers, he played on both sides of the ball.

Trammell finished 2020 with 1,473 all-purpose yards, 665 of which came during the Rebels’ state championship run.

“It’s exciting. You sit up at night and think about ways to get him the ball,” head coach Jason Allen said. “That’s fun as a coach. It’s fun to have a bunch of guys that I just have to figure out a way to get them the ball. It can be innovative, basic or all the way to snapping the ball to him directly. You want to do it in a high-percentage fashion, in other words, make it easy throws if you can. When you have guys that have speed and can knock the top off, the defense has to respect that and give some cushion. We’ll just take what the defense gives us and figure out ways to get the ball to those guys and let them play.”

“I really was excited, so I really think that was part of the reason I was so tired. I really was giving it my all because I really wanted to win the state championship,” Trammell said.

That game was also an eye-opening experience for the rising senior. Because he was on the field for virtually every play in the game, only coming off on a couple of extra-point attempts and one or two plays he needed a breather, Trammell knew he needed to develop his body more in order to stay on the field as long as possible. After helping the Rebels’ basketball team reach the state quarterfinals, Trammell hit the weight room, adding roughly 10-15 pounds of muscle.

“My motto is ‘do the stuff that you don’t want to do now so when you’re in the game, it’s going to show,” Trammell said. “That was my motto in the weight room, and that’s been it ever since then. My goal was always to get bigger, faster and stronger, so I can dominate when the season starts.”

Last season, Trammell added some versatility to the Rebels offense, as he lined up in several receiver spots and lined up in the backfield at running back. Now a senior, Trammell will be moved around more, lining up as a receiver, running back and even will have some designed plays at quarterback.

“He’s a guy that we want the ball in his hands,”  Allen said. “He’s a great teammate, so that makes it even better. His teammates love him and love playing with him. He makes them better, they make him better. He’s added a lot of bulk this year. He’s really worked his tail off in the weight room and changed his body. He can very easily line up and be our starting tailback. He is also lined up as one of our starting receivers. We’re going to try to get the ball to him. I’m looking for him to have a fantastic senior year.”

On defense, Trammell started as a cornerback for Allen, but because of the added bulk, Trammell will move to outside linebacker, giving the Rebels speed and power off the edge, with the ability to drop into coverage.

For most of the month of June, Trammell has been nursing a pulled hamstring. While he hasn’t been able to go fully into route-running drills, he has used the opportunity to become more of a leader on the team, coaching the younger and less experienced players on the finer points of the route running tree Chambers uses.

“Coaching wise, I feel like it’s given me a new perspective of looking at how I run my routes, looking at how other people do it, and then put it in their perspective to help them run it for themselves,” Trammell said. “When I come back, I can critique my stuff even better now because I’ve seen what they do and improved theirs.”