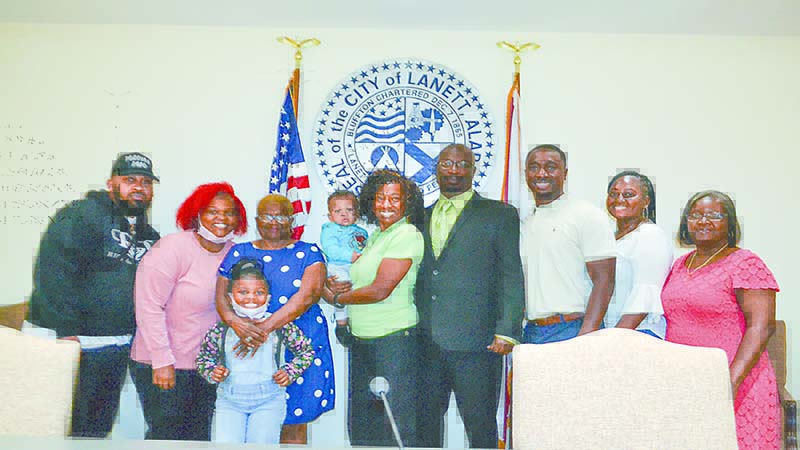 LANETT — Trent McCants is the City of Lanett’s new recreation director. On Monday, he was recommended to the full council by the recreation committee and approved in a unanimous vote. Jennifer Boyd, superintendent of city schools, and Clifford Story, LHS athletic director, were there to show their support.

“We interviewed two candidates for the position of recreation director,” said Committee Chairman Tony Malone. “We thought that both applicants were very good, but we are recommending Trent McCants.”

Mayor Kyle McCoy quickly seconded the motion, and it was approved unanimously.

With lots of family members and friends present, McCants was sworn into the new position by City Attorney Stanley Gray.

“I want to thank the mayor and council for this opportunity you have given me,” McCants said. “I will do my best for Lanett.”

“I want to congratulate Trent on the new position,” said Council Member Jamie Heard. “I think it’s a good situation for us with his son being the head basketball coach at Lanett High.”

“This is a good move,” said Council Member Angelia Thomas. “I can’t wait to see what he will bring to the table with our recreation program.”

A Juneteenth celebration is being planned for Saturday, June 19. It will be taking place from noon till 6 p.m. in West Point River Park followed by a 9 p.m. fireworks show at the Lanett Mill site.

“Everyone bring your lawn chairs and tents,” Malone said. “We want you to enjoy the day.”

In observance of the holiday, city hall will be closed on Monday, June 21.

Also known as Freedom Day, Justice Day, Liberation Day and Emancipation Day, Juneteenth dates to June 19, 1865, when slaves in Galveston, Texas were informed by Union Army General Gordon Granger that all slaves in the Southern states were free. President Abraham Lincoln had declared them free with the Emancipation Proclamation on Jan. 1, 1863. It was not recognized by the Confederate states, but it had the force of law when the South surrendered in 1865. The 13th Amendment to the Constitution, which outlaws slavery, was adopted in 1865.