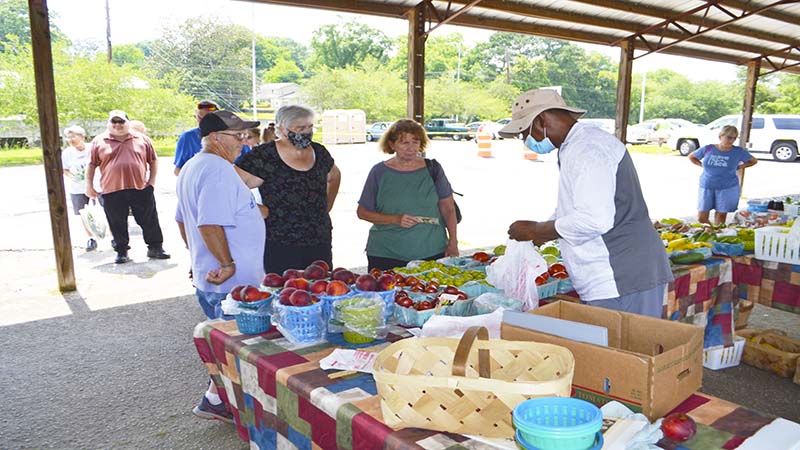 VALLEY — A good combination of sunshine and rain has allowed many Alabama farmers to see their crops coming in this year, and it’s not an event until the end of June. Nine farmers were on site underneath the Valley Farmer’s Market Pavilion Friday afternoon.

“It’s the biggest turnout we have had all year,” said Valley Parks and Recreation Director Laurie Blount. “I’m glad people are coming out to support our farmers. They work hard all year long. When they have their fruits and vegetables on sale here people should turn out in big numbers to get produce that’s fresh and locally grown.”

“We could have a Grillin’ Day late in the season if we can talk Sid (Lockhart) and Tommy (Weldon) to do it for us. We’d like them to do it together one more time because they are leaving soon,” Blount said.

Weldon will be retiring as Valley Police Chief on Sept. 30 and Lockhart has announced that he will not seek another term as Chambers County sheriff. The office will be up for election in 2022.

Jimmy Dykes of Beulah had his table filled with the white sweet hybrid corn he’s good at growing.

Matthew Steele had long lines at his booth for much of the afternoon. He had peaches and plums from Chilton County. He also had some vine ripe tomatoes he’d grown in a greenhouse along with field crops such as pepper, okra, squash, cucumbers, sweet potatoes and several kinds of beans.

“We have done okay so far this year,” he said. “We have gotten some good rain lately. That helps. We got off to a slow start because we had a late winter, but things have been getting better lately. The way I look at it, if you follow God’s word he will be good to you. That’s the way I live my life.”