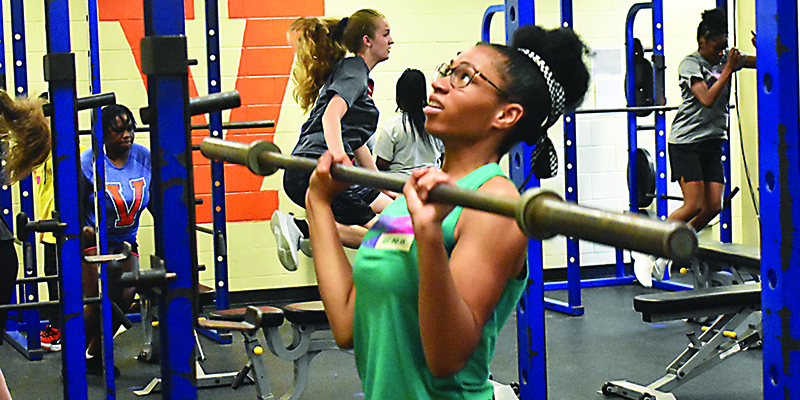 After not having a standard offseason last year due to the COVID-19 and the loss of several key starters from the 2019-20 season, the Valley girls basketball team struggled during its 2020-21 season. Now that the team can meet fully together and get into the weight room, head coach George Grimes is glad to be back with his team during the summer.

“It is a blessing. After last year’s COVID issues and not having them during the summer, really slowed down our progress,” Grimes said. “Now, it really feels like we have a shot to get better.”

The Rams had just two juniors on its team a year ago, relying mostly on younger players to provide serious minutes last season. With the lack of experience and the lack of time during the summer to truly get to work on some smaller fundamentals, Valley had a tough time competing with its 6A schedule.

While the weight room is an important part of getting ready for the season, Grimes uses it as a time to get his team to bond together before the season. They get to understand how each player works and thinks while having to give a full effort.

“A lot of folks think girls, weight lifting and basketball are a strange combination,” Grimes said. “In a lot of ways, it’s not about the weight lifting, it’s about them being together. They’re going to get stronger and get faster, but it’s more about them being together and being together, learning how each one of them does things. That’s the biggest thing. The weight room is just a different way of them being around each other. I hope they enjoy it. I missed them last year. I miss them not having that chance to connect besides when we started basketball practice.”

Grimes had his team in the weight room for the first of the two-hour training session. Since most of the girls, even some of the returning players, were fairly new to the weight room, Grimes spent Tuesday as a teaching day, instructing how different lifts should be performed and making sure the girls had techniques down before adding any weight. Adding weight will come later this week and it will go up during the next two months.

The other hour was spent on the hardwood, working on different fundamentals, something that Grimes said was a focus for the summer.

“We have to become a better perimeter team in some aspects. We’ll have an inside game but we have to get a lot better on the perimeter,” Grimes said. “A big focus will be defense. This is normally where I get to really talk and break down defense, explaining how we do things. Having the junior high here also, it gives them a building block for the future too.”