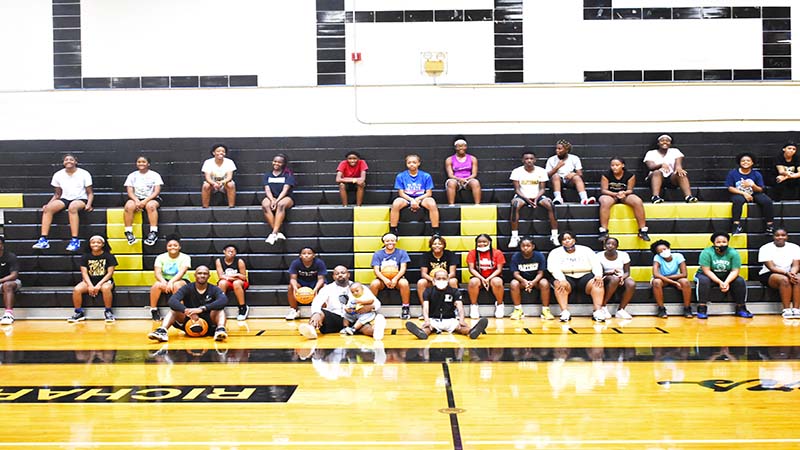 More than 20 girls took part in the Charlie’s Angels skill camp on Saturday. The camp, which was free to attend, kicked off the summer season for the Lanett girls’ basketball team.

Williams wanted to continue the 2020-21 team’s momentum heading into the summer, so he hosted the first annual Charlie’s Angels Basketball Skill Camp on Saturday. Overall, more than 25 girls showed up for the two-hour camp.

Along with Williams, the camp had Lanett rising seniors Bryant Story and Teo Cheeks helping as instructors along with Mo Finley, a former LaFayette graduate who played at UAB.

“We have an awesome instructor,” Williams said. “Morris Finley, who played at UAB and overseas, he’s a great instructor. We’re best friends, grew up together. He came in, and they followed all of his instructions. It was a great day.”

The girls worked solely on different skills during the camp, specifically different ball-handling and passing drills, instead of focusing on putting up shots. While the girls didn’t shoot during the camp, they learned how to get to take a shot.

The camp was a way for Williams to get his girls some work as the summer season began to start up. The leaders on the upcoming 2021-22 Lanett team took the idea of the camp and recruited all the girls that were interested in playing for Lanett in the future.

“It starts with your leaders. Breanna Glaze, Ameria Zeigler and Samahria Davidson, they told these young girls ‘if you want to be part of Lanett’s next program, you have to be here. You can’t just show up for tryouts and say you want to play basketball. You have come to be in the grind with everyone else,’” Williams said.

The Charlie’s Angels camp signaled the beginning of the Panthers’ summer season.

“It’s just something for them to do,” Williams said. “Some of them will call me [and ask], ‘coach can we get in the gym?’ so I just said I was going to make a camp day out of it. We’re going to get in the gym and get some work done.”

“They’re ready to get back in it. I’m just glad that it’s safe and they’re smiling again,” Williams said. “Last year, I didn’t see any smiles until the end of the season. Everyone was kind of down and just almost done with that year. Now everyone is excited and smiling again. They’re interacting with each other again. Last year at this time, I couldn’t do that. I had to send everyone home.”

Williams also wanted to thank the city of Lanett and Trent McCants for providing food for the girls after the camp.