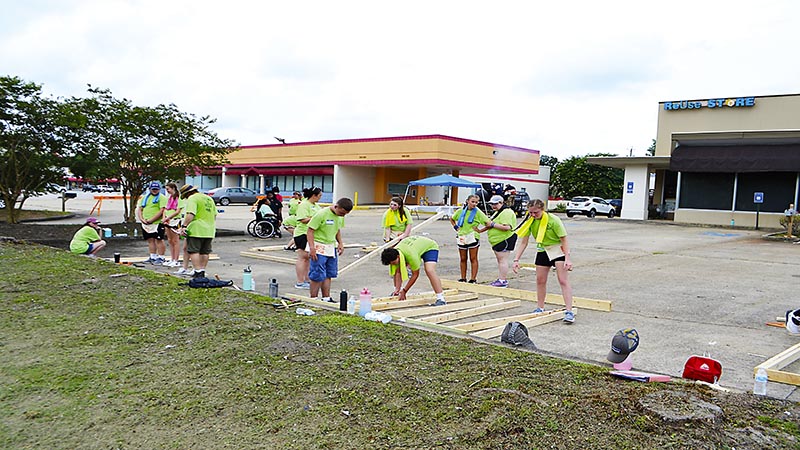 LANETT — A group of 45 teens from the First Baptist Church of Minden, Louisiana are in town this week taking care of a host of needed work details for the Chattahoochee Fuller Center Project (CFCP). They will be in Lanett through Friday doing volunteer work inside the ReUse Store, completing rehab work on local CFCP homes and building an entire set of walls for CFCP Home No. 66 that will be going up in West Point the first week in October.

The group arrived Monday in a Red River bus and have been staying at the Point Place Apartments.

“We try to do a mission trip with our youth every summer,” said Youth Minister Chad Parks. “We have previously done volunteer work for the Fuller Center. Several years ago we put primer on some Fuller Center homes in Spring Hill, not far from Minden. We wanted to do something bigger this summer and contacted Stacy Driggers at the Fuller Center in Americus. They told us about Kim (Roberts) and Robin (Pierre) at the ReUse Store in Lanett and that they have a very active partner organization going on there.”

“Everyone was really excited about coming here,” said Youth Volunteer Adult Leader Jodi Tuttle. “This is such a welcoming community. We appreciate the hospitality we have received. We had a man come by yesterday to give us watermelons. The kids really liked that.”

They made major progress on the wall sections for Home No. 66. They will need 42 of them for a complete set. In high spirits, while watching the work were the two new home owners for No. 65  and No. 66, Latrisha Finley and Asia Hoffman. The walls for No. 65 will be built by the Barry Stuck family when they get here this fall for the CFCP build. Stuck will be the house captain for Home No. 65. He will have approximately 20 people making the trip with him from Pennsylvania. There will also be some local volunteers helping.

“We are proud of this youth group,” Parks said. “It’s a special group of young people. We do lots of service work back home. They have especially enjoyed working for a local food pantry that prepares hot meals for the homebound. They started off by helping 12 people who are members of our church. We go to their homes twice every month. The number of people being served has risen to 35. We are taking 70 meals to their homes every month. The most important thing they have learned is that there are homebound people in your neighborhood you may not have known about. Some people we are serving have told us that what they like most about the program is the visits they are getting. They have told us that even if the meals are cut out they would still like to have people come to see them. Receiving guests is a big part of their life.”

The youth group has been creative in making homebound residents feel special.

“We do something extra special for them on their birthdays and on holidays like Mothers Day and Fathers Day,” Tuttle said. “We call ourselves the Third Floor Crew, and people love it when we come to visit them.”

“They haven’t said no to anything we have asked them to do,” Parks said, “and I haven’t seen anything they can’t do. It’s a blessing for us to be here. The reception we have gotten has been wonderful. We went across the state line to Johnny’s Pizza in West Point. We had more than 45 people in our group, and they handled it great.”

Roberts talked to the big group about what the CFCP does for the Chattahoochee Valley.

“We want to have a Block of Blessings in Minden,” Parks said, referencing a CFCP project to take on clean-up details in entire neighborhoods.

Roberts and Pierre had a surprise for the youth group when they arrived on Monday. Each one received a light green t-shirt with the Fuller Center logo on the front and in giant letters on the back: “I Built the Walls on House No. 66!”

“What this group is doing this week gives us a good head start on building two new homes this fall,” Roberts said. “We plan to start on Oct. 4 and to dedicate them on Oct. 8. The Stucks will be here, and we will have a lot of local volunteers here, too. We appreciate the donations we have gotten from local businesses like West Frazier (formerly Norbord) and Knauf. The paint we will need has been donated by Behr.”

Captain Jamie Heard and Tyler Sheridan of the Lanett Fire Department were there Tuesday cooking hamburgers for the youth group.