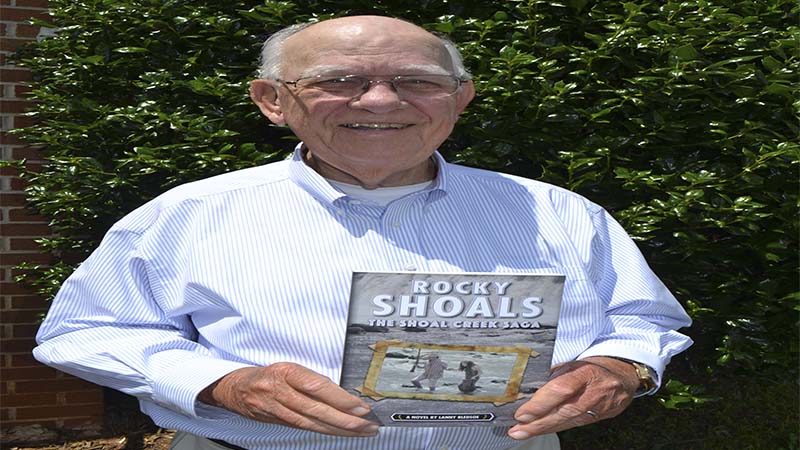 VALLEY — “Rocky Shoals,” the fourth book in Lanny Bledsoe’s Shoal Creek series, has been published and is now available on Amazon. The first three books of the series – “Shoal Creek,” “Rep’s Return” and “Storm Rising” – are also available on Amazon and at local stores such as Chambley’s and the Fairfax Village Antique Market (former Taunton’s building).

A man named Floyd Wimms is the central character of Rocky Shoals. He grew up on the Chattahoochee River just south of River Bluff. He was well thought of in the community before disappearing for a couple of years. It seems he followed a sense of wanderlust to follow the river to its source in the north Georgia mountains. From there he journeyed on to western North Carolina to live with the Cherokees. He made his way back home a very different man from what he was when he left.

It wasn’t living with the Cherokees that changed him. It was the bad memories of being in the trenches of World War I. He had been drafted into the Army when he was 18 and sent to France following basic training.

Bledsoe said that he’d thought from time to time about being a published author but never got serious about it until the COVID-19 shut down in March 2020.

“Before that, I had written some information on family histories, but it was nothing like this,” he said. “Writing the Shoal Creek series has been a good experience for me. It has got me reconnected with many people I used to work with at WestPoint Pepperell. They know me in a different way now. They ask me about the books.”

People from all over the country have contacted him about the Shoal Creek series.

“I have gotten over 300 positive reviews about the books,” he said.

The task now is to get copies of the books in more people’s hands.

“I think if we could do that, more and more people would like it,” Bledsoe said. “People who read the book like the characters and what they have to deal with.”

Bledsoe said he wants to keep writing but is looking to move away a bit from the Shoal Creek saga. He’s now writing the manuscript for a fifth book. It will focus on Floyd Wimms and his return trip up the Chattahoochee to reunite with his friends among the Cherokees.

“It will be somewhat in the same area but not tied in as much,” he said. “I want to keep doing something to keep me occupied. If I keep going with Shoal Creek it will look like 20 years into the future.”

The series began with Rep Doe’s journey on foot from south Georgia to Shoal Creek Farm in the Chattahoochee River Valley. That was around 1930 at the dawn of the Great Depression. Two decades later would be the post-World War II period of the early 1950s. The world was a very different place then.

“I will still keep my writing in the same Southern area,” Bledsoe said.

Bledsoe said he’s gotten lots of responses from people who read his books on kindle.

“One woman from Arizona has reviewed 125 books,” he said. “She has given me good reviews of all four of my books. The challenge now is to get the books better known. I believe that if I can get the books in people’s hands they will like them.”

Bledsoe said the response he has gotten locally has been flattering.

“At lunch on Wednesday, three people came up to me and told me how much they liked the characters in the Shoal Creek series,” he said. “They talk to me like they are real people. They ask me how May Hobb is doing.”

In the books, May is a beautiful young woman from River Bluff who gives in to the temptation of making fast, easy money at the strip clubs downriver in Phenix City.

The series starts out with a deadly conflict between River Bluff residents on the Alabama side of the Chattahoochee River and those who live on the lightly populated Georgia side. Some of those living in the swamps and pine thickets on the east side of the river make moonshine whiskey. Some of their best customers are across the river in Alabama. In real life and in fiction, trouble happens when drunken men get too friendly with the women on the wrong side of the river.

Whether or not whiskey and women were involved, there was an infamous incident in 1915 when three River View men, brothers Max and Epps Melton and their good friend John Leak, were murdered on the Georgia side of the river. Their badly mutilated bodies were found near Houston’s Ferry a few days later. No one was ever charged in the case. It was widely believed at the time that it was a revenge killing. One of the Melton brothers had killed a prominent Harris County man, Manse Teel, in the recent past. The killing took place near Goat Rock on the Harris County side. There were hard feelings about the incident, and there was a change in venue when the case went to trial.

It was tried in Atlanta, and Epps Melton was found not guilty due to self-defense. Witnesses at the trial testified that Teel drew a gun first on Melton, and he acted to defend himself. The result did not go over well with some people in Harris County. There were stories that they would “fill up the river with Meltons” before it was over with.

The often told story is that John Leak was with the Meltons when they were forcibly taken. They offered to let him go, but when he tried to defend his friends he was killed, too.

A young boy named Will Dunn claimed to have witnessed the killings. He said he’d been hiding in the woods when all the commotion was going on. He said the three slain men were hung up while the killers danced around them “like wild Indians.”