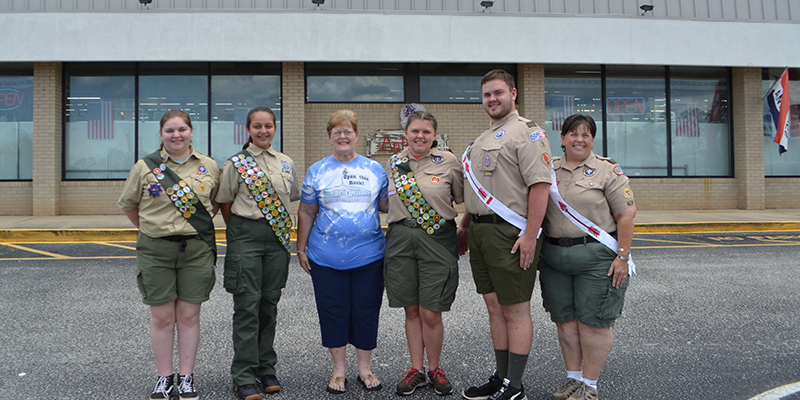 VALLEY — LilaMae Daughtrey was one proud sister when brother Jacob Daughtrey earned the rank of Eagle Scout in 2019. She is now on the verge of doing the same thing and could make history in the process. She would be the first-ever female Eagle Scout in Valley.

Daughtrey is currently working on her Eagle Scout project.

Daughtrey calls it Three Wishes. Her initial goal was to provide three food items to each of the 50 residents and three staff members at Sylvia Word Manor.

“I wanted to give each one of them one item they needed, one they wanted, and one they hadn’t had in a while,” Daughtrey said.

Through organization, hard work and some generous donors, Daughtrey has far exceeded her goal.

“She was able to provide seven food items, bottled water and hand sanitizer for each resident,” said her mother, Gayle Daughtrey, who’s her assistant scoutmaster.

Daughtrey distributed questionnaires to the residents. Those who responded will receive some extra food items in addition to the seven they receive.

The second part of LilaMae’s project was to provide some items for the residents that have been made from up-cycled materials.

“They will be receiving such items as an upcycled hummingbird feeder, a string art wall hanging and a planter box for flowers or vegetables,” Daughtrey said. “All of the wood used in the project was donated by my grandmother, Jane Ledbetter, from wood that had been stored in the woodshop of my grandfather, Wayne D. Ledbetter.”

A bench will be made from some of that wood. It will be placed in a garden area on the grounds of Sylvia Word Manor.

Daughtrey said she wanted to do something special for seniors.

“I wanted them to know that they were loved and had not been forgotten,” she said. “I think they suffered the most from COVID-19. The quarantine and social distancing were difficult for them. The hardest part was that they couldn’t be with their loved ones.”

Daughtrey, 17, is a Life Scout with Troop 31 in LaGrange. Fellow Scout Tash Brawner is the first female Eagle Scout in the LaGrange area.

Jacob is affiliated with Troop 9003 in West Point and Troop 9009 in Valley.