Dooley to have leadership role for Valley High football team 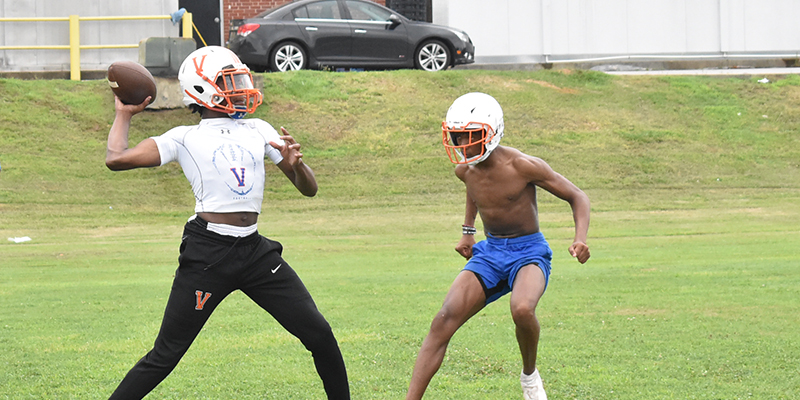 The Valley football team is going to be young in 2021. The team, which lost several key offensive starters a year ago to graduation, will only have five seniors on its roster when it travels to Beauregard to start its season on Aug. 20.

In order to compete with a tough 6A region, the Rams are going to need some younger players to step up and play big roles on the football field. One of those players that will step up this season is Cam’Ron Dooley.

Dooley is entering his sophomore year at Valley High School. As a freshman, he played predominantly junior varsity, failing to see the field in 2020. With Will Kennedy gone, Dooley is stepping into the quarterback position for head coach Adam Hunter.

“It’s been different. Last year, I didn’t really get to play for real,” Dooley said. “[Hunter] made me work harder,  all the time working out at quarterback. Last year, I really didn’t get the chance to do that.”

While Dooley is still a young athlete, the athleticism has been there, he just needed to refine his craft. Now that he is getting a chance to go through drills, Dooley is developing quickly. Hunter believes the biggest step the sophomore has taken is his maturity.

“He’s more disciplined at the quarterback position,” Hunter said. “He’s more technical now, he wants to do everything the right way. He’s making his reads. At that position, he’s stepped his game up a lot. He’s throwing the ball really well right now, and it’s just a testament on how [hard] he’s worked. We’re looking for bright things from him. He’s become a guy that we can count on to do things the right way.”

Since basketball season ended in February, Dooley has been one of the Valley players that has almost lived in the weight room. The long and lanky freshman, who finished his freshman year around 6-foot-2, put on some muscle and wasn’t afraid of contact anymore.

With Dooley at quarterback, Hunter’s playbook is expected to expand. He will be able to use Dooley’s speed to run some read options, whether the option will be for a quick slant pass or Dooley to tote the ball himself.

“It allows us to do more things offensively,” Hunter said. “It allows us to be more versatile and hit more big plays and do some misdirection stuff with him. That’s going to be huge for us. Maybe we can get the defenses lulling a little bit and hit him with something. It opens up our playbook when we have a dual-threat quarterback, and he fits in that mold.”

Along with vying for the starting quarterback role, Dooley will also see some time on defense, playing in the secondary where he can use his height and speed to ball-hawk the middle of the field.

Along with working to be the starting quarterback in the fall, Dooley will have an important role for the Rams’ basketball team this winter. He is part of the sophomore class that will have five players on the varsity team, with probably two or three starting at the beginning of the season.

“It’s been busy. A lot of practice, a lot of working out,” Dooley said of his summer. “I have AAU too.”

Harper, who is also the Valley boys basketball coach, said Dooley’s weight room effort will pay off on the hardwood as well.

“I think he’s grown about two or three inches since last year,” Harper said. “You can see his body developing, getting a little stronger, a little faster and a little quicker. You want to gain some weight each year. You want to get stronger each year and polish your skills each year. The kid has been doing a great job. He works out, then shoots some basketballs. I think he’s been doing a great job.”

Dooley’s goal is to win a state championship with the class that he has grown up with. He has three years to accomplish that goal, but he has his eyes set for the 2021 season.