Family travels to West Point to see where ancestors lived 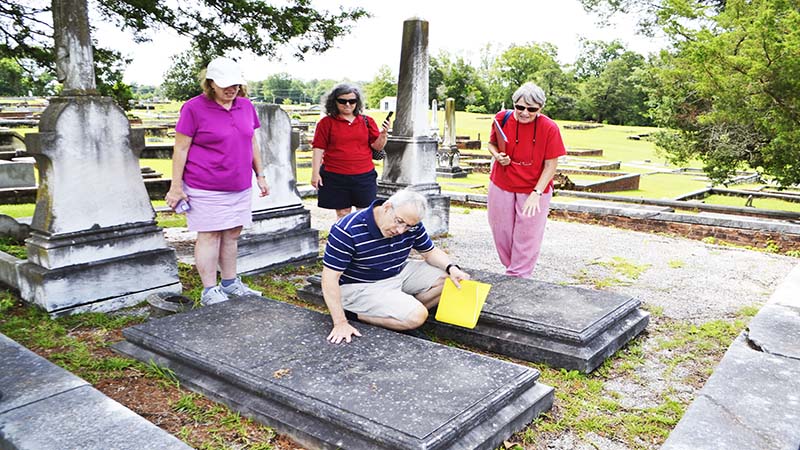 CORRECTION: This story has been updated to reflect that Marc Cohen and Terri Heyman are husband and wife.

WEST POINT — Cousins Robert Wittenstein and Terri Heyman of the Atlanta area have talked many times about taking the drive down I-85 to the Georgia state line and visiting West Point, where their ancestors had businesses, and nearby Lanett, where they lived. They did that on Wednesday and had a great time seeing the places they had heard so much about over the years.

Wittenstein made the drive down with his wife, Susan, and Heyman came down with her husband, Marc Cohen. The Wittensteins live in Dunwoody, where Robert has served on the city council, and Heyman resides in nearby Sandy Springs.

Their first stop was the Jewish section in historic Pinewood Cemetery. Many members of the Jewish families who helped build the West Point business district and who lived on Heyman Street in Bluffton lie at rest there. Malinda Powers, president of the Chattahoochee Valley Historical Society, gave them a guided tour. The Jewish section is located in Pinewood’s left-front quadrant section, just off Highway 29. The names Heyman and Hagedorn are prominent on large grave markers. Other names in the section include Altamayer, Levy, Herzfeld, Merz, Sterne and others. Those who are buried there were members of Temple Beth-el, a synagogue that stood for many years in Bluffton/Lanett.

Though he isn’t buried there, there’s a large monument for Louis Merz in a Heyman family plot. In the 1850s, he partnered with fellow immigrant Heyman Heyman in a mercantile business in downtown West Point. When the Civil War broke out, he joined the Confederate Army and served in a number of campaigns in 1862 before being killed at the Battle of Antietam. He was most likely buried in an unmarked mass grave near the battlefield.

The marker that stands today in the Heyman plot is next to the final resting place of Merz’s sister, Betty Merz Heyman. She’s the great-great grandmother of Robert Wittenstein and Terri Heyman. She met Heyman Heyman in Cincinnati, Ohio in the late 1850s. They fell in love and were married there by the famed Rabbi Isaac Mayer Wise, the founder of Reformed Judaism in the U.S. In 1883, Rabbi Wise would make the trip to Bluffton, Alabama and preside at a double wedding at the home of Heyman and Betty Heyman. Sisters Lula and Jennie Heyman married brothers Phillip and Zach Hagedorn. Jennie would live to the ripe old age of 107.

Powers said the story of the local Jewish families of the 1800s is one of faith, family and friendship. “It bonded a community tightly together,” she said.

It all began in 1852 when Heyman Heyman journeyed across the Atlantic Ocean from Europe to Philadelphia. He knew he’d have at least one friend there, Sam Cohen. On the ship bound for the U.S., he met a young couple from Prussia named Levi and Lena Herzberg Sterne. They were on their way to Philadelphia, too. They would become good friends.

In the city of Brotherly Love, Heyman boarded with Cohen and was introduced to one of Cohen’s cousins, Louis Merz. They’d become the best of friends. Heyman got a job as a bookkeeper and Louis peddled merchandise in the countryside. They’d eventually make their way south to LaGrange, Georgia. They thought it would be a good place for business since a rail line from Atlanta ended there. By 1854, though, that line would extend to West Point. That would be an even better place for business since the railroad would meet the line heading north from Montgomery, Alabama. In 1854, Heyman & Merz began their mercantile business in West Point. They boarded with a couple named Reuben and Arabella Lanier, who were raising several sons at the time. Heyman and Louis especially liked talking to to Reuben about West Point’s future as a good place for business. By the late 1850s, Heyman and Merz had become two of the earliest Jewish settlers on the Alabama side in a place known as “Bluff Town” and eventually Bluffton. In 1858, they were joined by Levi and Lena Sterne – the couple Heyman had met while crossing the Atlantic. They moved down from Philadelphia. Joining them were Levi’s brother Ansel. Daniel Merz, Louis’ brother, came to Bulffton as did another Jewish man named Jacob Frieselben. By 1859, the Heymans were hosting Jewish religious services in their home.

When war broke out in 1861, a number of these men joined Company D of the 4th Regiment, also known as the West Point Guards. Enlisting as privates were Louis Merz, Ansel and Levi Sterne and Jacob Frieselben. Also on the roster was Isaac Heyman, most likely Heyman’s brother. Heyman and Daniel Merz volunteered for service but were turned down due to poor eyesight. They would help the Confederate cause by purchasing some land west of Bluffton and having a tannery producing leather harnesses for horses and shoes for soldiers. That stream is still known as Tanyard Creek and the surrounding neighborhood Heyman Pines.

The war came to Bluffton on Easter Sunday 1865. Union forces under the command of Col. Oscar LaGrange placed artillery on the top of Ward’s Hill and began a bombardment of Fort Tyler. The City of Lanett water tank is on this site today.

Shells were sent flying over the Heyman home. Neither Heyman nor Daniel Merz were at home at the time, but Heyman had taken the precaution of placing Masonic emblems on his front porch. Betty Heyman, her children and some neighbors were huddled in the cellar of the home. They heard the footsteps of Union soldiers entering the home but found nothing missing after they’d left.

After the war, Ansel and Levi Sterne and Jacob Frieselben returned home to West Point, and business partners Heyman & (Daniel) Merz reopened their dry goods store. In peacetime prosperity, Bluffton’s Jewish families began to grow. Daniel married a Philadelphia girl, Regina Herzberg. They had a son they’d name Louis in memory of Daniel’s brother who had died in the war.

In 1877, Heyman and Betty moved their growing family down the street to a home that had been built a few years earlier by Dr. Benjamin Thomas Smith. The large house still stands on North 14th Street. Louis Merz moved into the Heyman’s former home and remodeled it in the Victorian style. Years later it would become the home of his son, Louis Merz.

Heyman (also known as Herman) Heyman died in 1885. His partner, Daniel Merz, assumed leadership of the company. Bertha Heyman began working as a cashier and remained with the company for 40 years. Very active in Temple Beth-el and civic work, she lived to be 100 years of age.

Lee Heyman was 15 when his father died and soon began to learn the business. The store prospered and an annex opened across Gilmer Street. This is the present location of Johnny’s Pizza in downtown West Point. In 1902, Daniel Merz left the company, and it was renamed Lee Heyman & Company. Lee’s sister Bertha and younger brother Louis Phillip Heyman were in business with him. Lee married Hattie Strauss, and he built a home on North 14th Street in 1908. Their two-story home faced North 14th. Just behind it on North 4th Avenue was Temple Beth-el. Both the house and the synagogue were torn down in the 1970s. The house of worship had become inactive in the 1950s. By then, its members had either died or moved away. There was a special service inside the building in 1959 to mark 100 years of the Jewish faith in the neighborhood. It had been practiced in the homes of Jewish residents since 1859; Temple Beth-el began hosting religious services in 1909.

The visitors from Atlanta enjoyed walking along North 14th and being told that its original name was Heyman Street. They took photos of the historic homes on the street including the Heyman Heyman home, the 1886 Phillip Hagedorn House and the 1907 John J. Hagedorn House. They even ventured over on foot to get a glimpse of Tanyard Creek, the location of their great-great grandfather’s Civil War tannery.

They were enthusiastic about Powers’ idea of having an historic district in this area of Lanett. There’s already a historic district across the state line in West Point. Such a district in Lanett could include homes on North 14th and North 18th streets plus the 1895 McPherson Home. The grassy field where the Lee Heyman home and Temple Beth-el once sat would be ideal for a city park dedicated to the local area’s long history of admiration and respect for two of the world’s great religions.