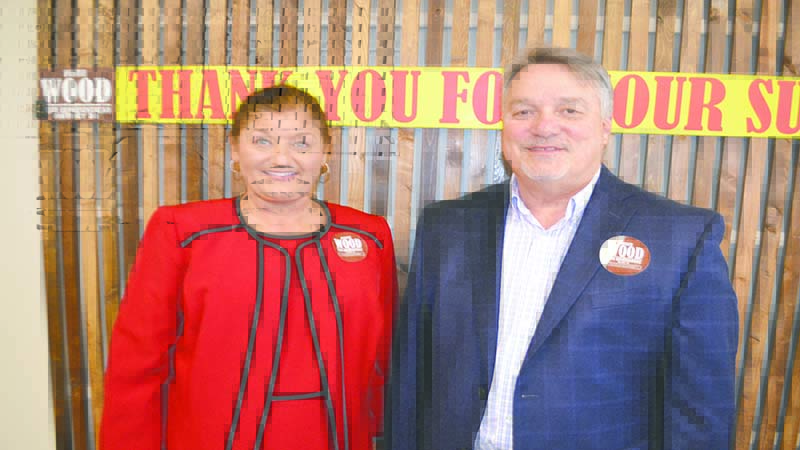 LANETT — State Representative Debbie Wood of Valley will be up for reelection next year. She was elected to her first term in November 2018 and has since served on the House County and Municipal Government Committee, the Lee County Legislation Committee, the House Ways and Means Education Committee and the Urban and Rural Development Committee. She had previously served as a Chambers County commissioner and as president of the Alabama Association of County Commissioners.

She intends to seek reelection to the Alabama House, representing District 38. On Thursday afternoon, her supporters held a fundraising event for her candidacy in the new terminal at the Lanett Municipal Airport.

One of the speakers was Nathaniel Ledbetter, who represents DeKalb County and is the House Majority Leader.

“You are fortunate to have Debbie Wood representing you,” Ledbetter told a crowd gathered inside Lanett’s new airport terminal. “She is a superstar in Montgomery. We need her back for another term. She’s the real deal. She has a true servant’s heart.”

Ledbetter said he had been deeply touched by Wood’s efforts to allow family members to be with a family member close to death with Covid.

“She worked hard to get that changed, and she deserves applause for that,” he said.

Wood experienced that personally when her mother passed away in 2020.  No one from the family was allowed to be in the room with her.

In seeking the change, Wood argued that if hospital personnel can be masked and suited up to be in the room, why can’t one family member be there for a loved one in such a crisis?

“I drove here today from DeKalb County to support her,” Ledbetter said. “She deserves your support. I think you need her back. I cannot understate the work she is doing for you in Montgomery. There’s lots of good things going on in this state, and she is a big part of that.

Mayor McCoy told the sizable crowd present that he was proud of the work that had been taking place at the airport. It’s undergoing a major transformation from a small airport with a runway of 3,100 feet to a much larger facility with a runway over one mile in length, a new terminal and plenty of space for rental hangars and tie-down locations for planes.

“Hopefully within the next six months, it will be reclassified from a municipal airport to a regional airport,” McCoy said. “Lots of the progress you can see here is the result of the hard work being done by the Chambers County Development Authority, the city council, Senator Richard Shelby and his office and people like Debbie Wood. We are fortunate to live in a tight-knit community. The people of Lanett, Huguley, Valley and LaFayette share common interests. It was very common in the old days for people in Lanett to work at Fairfax Mill and for people in Fairfax to work at Lanett Mill. This airport will be a wonderful tool for economic development for all of Chambers County. It will allow us to be much more competitive in attracting new industry and commercial development.”

“We thank Debbie Wood for the way she has represented her district and all of Chambers County,” McCoy continued. “We are proud of what she has done in Montgomery and before that as a Chambers County commissioner. She is a strong advocate and supporter of everyone in this room.”

Wood thanked everyone for being there.

“This was a mill community for a long time,” she said, “and when the mill company left it left a big hole. We were lost, and it took strong leadership to turn things around. The Development Authority has been big for us in this. It’s been tough, but we are getting there.”

Wood thanked Todd Shackett for what he is doing for Southern Union and Gary Fuller for what he’s done in Opelika.

She noted that Opelika had offered a big helping hand when Chambers County was getting an industrial park started at Exit 70 when Kia was on the way.

“They provided sewage to the park,” Wood said. “There’s 2,000 jobs there today because of that. Something new is going on in Opelika all the time. They have a Whataburger on the way. When communities close to us are doing well that’s good for us, too.”

Wood said that Randy Price has quite a story to tell about surviving Covid-19.

“When you have been on a ventilator and survive your life has a purpose,” she said.

Wood thanked Angelia Thomas for her council service in Lanett and for being the office manager in her real estate business. Thomas said the opening prayer at the event and Billy Mitchum led the Pledge of Allegiance.

Wood had a special word of thanks for the large number of family members present. She introduced them one by one.

“When you do something like this, your family has to be all in for you,” she said. “They have done so much to help me, and I am so thankful for that. When I was running for office, they put up signs all over the district.”