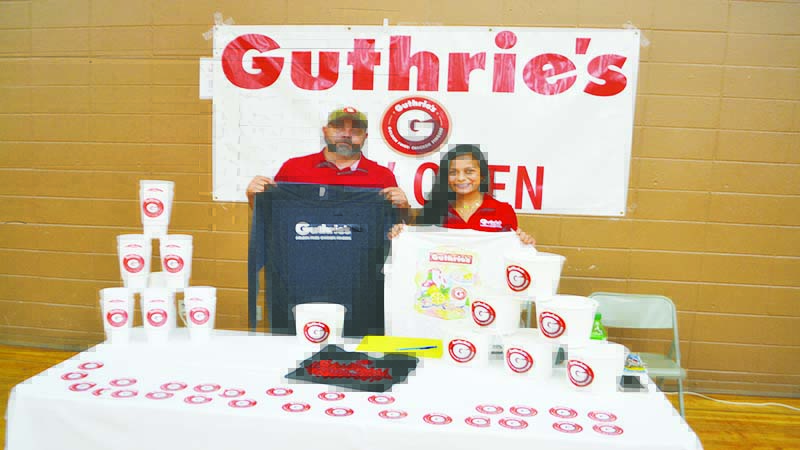 LANETT — One thing was clear at Friday’s job fair hosted by the Lanett Recreation Department — there are plenty of local jobs available right now for anyone who wants to work.

Among those with tables at the fair were the City of Lanett and the police department, the new Guthrie’s restaurant in Lanett, McDonalds, Krystal, Popeye’s, Taco Bell, Jack’s and Hibbett Sporting Goods in Valley

The City of Lanett has up to 20 openings right now.

“Anyone who wants to work can get a job with the city right now,” Utilities Superintendent Tony Chandler told The Valley Times-News. “We need meter readers, grass cutters, linemen for the Electrical Department, people for the street department, recreation department and for the police and fire departments. We also need a part-time cashier at city hall.”

Police Chief Johnny Wood and Patrol Commander Richard Casner were at a table taking applications for the Lanett Police Department. There’s a need for four patrol officers right now. LPD has 31 sworn officers when it’s at full staff. There’s also some civilian personnel such as clerks and the animal control officer.

Brian Pefter, Denise Clark and daughter Caitlyn Clark were at the Guthrie’s table. Guthrie’s is on pace to open in late August or early September. Between 25 and 30 new employees are being sought. This includes positions in management along with cashiers and cooks. The new business is owned by Pefter and Chris Clark. Pefter is a 1995 graduate of Valley High and worked for the Flowers Baking Company in Opelika for 16 years.

Store Manager Joe Wells was at the McDonalds table. He said the Valley store is looking for somewhere between 25 and 30 people. Starting pay is at least $10 an hour and the positions open include management, cashiers and the grill area. “Not having the people we need has been tough on us,” Wells said.

Popeye’s has been in business for two-and-a-half years and was doing great before Covid. Things are slowly getting better, but the Valley store needs four to five new cashiers. At full employment, the business has 35 employees.

Joyce Paige and Matescia Gullatt were at the Taco Bell table.

“We are looking for people who can work any hours,” Paige said. “We need shift lead managers, cashiers and food service staff.”

Jack’s is in need of close to a dozen new employees.

“We need people for all positions, both day and night,” said Stephanie Core, general manager of the Valley store. Jack’s is one of the best-known business brands with an Alabama origin. It was founded by Jack Caddell in 1960. The company now has more than 20o locations in Alabama, Georgia, Mississippi and Tennessee.

The Krystal store in Valley is in need of eight new employees. Shift leaders and members of the crew are needed to get back to full service. Since the Covid shutdown in 2020, the store has had its indoor dining area open only when there’s enough staff present to take care of both indoor customers and those in the drive-through lane.

“We will need at least 20 people to have it open completely,” said Justin Gray, the general manager.

The Hibbett’s store in Valley is in need of six new employees. According to Fenick Darden, the assistant manager, the store needs manager trainees and sales associates. Both full-time and part-time positions are available.

Among the benefits are flexible hours, casual dress code and discounts on your favorite brands.