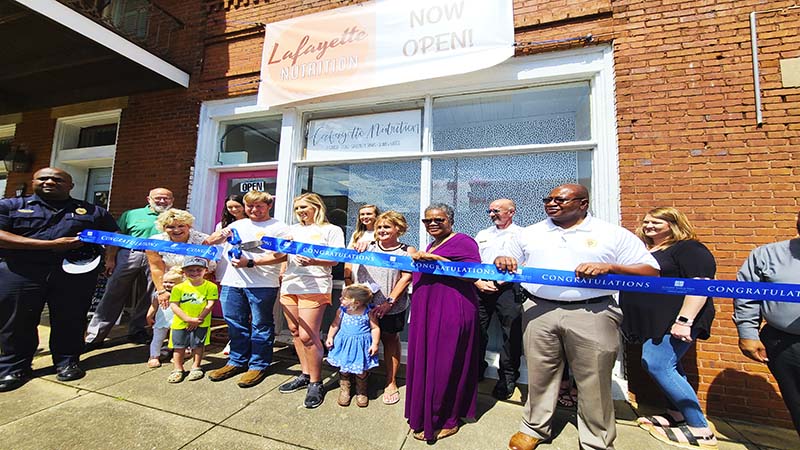 Chase Edge and his wife, Blaire, are the newest business owners in LaFayette, as they officially have opened LaFayette Nutrition, the newest nutritional drink store in Chambers County.

“Everyone in LaFayette, they want to see the town thrive,” Edge said. “That’s the same idea. I wanted to see the town grow. We haven’t had a lot come to LaFayette lately, so we thought it was a good idea to get something nutritional up here as well, give a healthy option to everyone. It’s not something that you see every day.”

This is the second drink nutrition store the Edges have opened, as Blaire opened their first location in Phenix City where Blaire grew up.

“It was really successful,” Edge said. “It had a lot of involvement, and there was a lot of interest up here, so we decided to go out on a limb and open one. So far, there’s been great support from everybody.”

Edge said he and his wife decided to open a store in LaFayette in early May, finding its location in downtown LaFayette less than a block away from the Chambers County Courthouse.

LaFayette Nutrition opened on June 11 and in the 27 days since it opened its doors, Edge said it has had support from the public.

“We’ve put a lot of work into it, and we’re excited to be here,” Edge said. “This is where I grew up and this is where we built a family together. We’re just really excited. We appreciate all the support.”

“There are quite a few clubs around the country. We buy from a company called Herbalife. They have a team that has a list of products and makes the drinks, so that’s where they all come from,” Edge said.

Council members Shannon Hunter and Tammie B. Williams were present at the ceremony, along with Fire Chief James Doody and Police Chief George Rampey to show support.

“On behalf of the mayor and the city council of LaFayette, we want to welcome you to LaFayette,” city council member Tammie B. Williams said. “We pray that you have an abundance of blessings here. If you need anything, you can always contact mayor [Kenneth] Vines.”