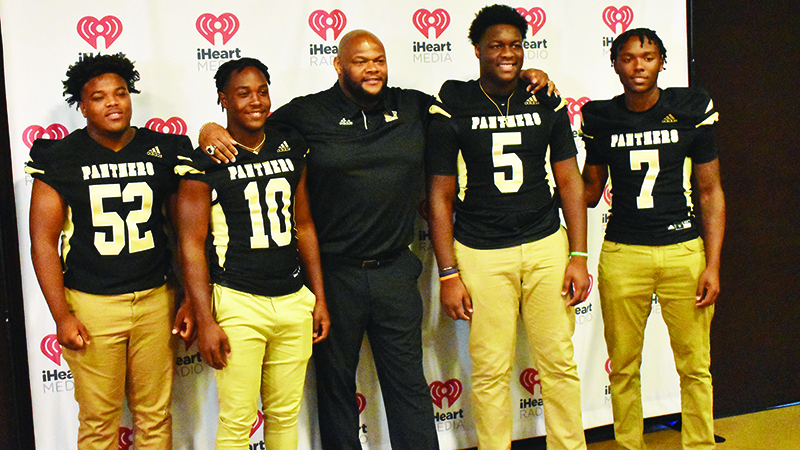 During Lanett’s session at the iHeart Radio media days on Tuesday, Lanett head coach Clifford Story believes that his team will continue to be a state championship-caliber team in 2021.

“There’s no doubt,” Story said. “When you don’t win it, it does something internally and drives you more and more each year. I know that I have a bunch of guys that have exposure to playing in the big games. They know what it feels like to put a ring on your hand and that’s what we’re going to do. I don’t shy away from it. People say ‘coach, that’s bragging.’ That’s not bragging, it’s believing. I’m a firm believer that life and death are in the power of the tongue. That’s what I stand for, and that’s what I believe in because I know Lanett is going to be where Lanett is supposed to be. I tell them all the time, ‘we’re going to be around when the grass is brown.’

Though Lanett lost a significant amount of talent from 2020’s team, the Panthers are reloaded heading into 2021, returning one of the biggest and oldest offensive lines Story has had in his 13-year tenure at Lanett, a college-level running back, a quarterback that threw for more than 1,000 yards in 2020 and a stout defense.

“I tell the kids all the time ‘we’re not going backward,’” Story said. “We don’t rebuild, we reload. We have a great group of young guys that really understands the program and what it’s going to take for us to get to this point. The 2021 season is going to be exciting, and I’m excited for it and for these guys to make the adjustments that we need to make to be successful.”

Last season, Markavious Atkinson was the starting quarterback for the first six games of the season, but a concussion opened the door for a quarterback change, as graduated senior Kadarius Zackery took over the starting job and ran with it, figuratively and literally, finishing as an Alabama Sports Writer Association First Team All-State athlete. Though Atkinson didn’t finish the season, the senior bought into the program, got his body in better shape and started relearning the game of football, which Story and Atkinson both said was the biggest jump the now senior took from 2020.

“When I left Valley, I really didn’t play my 10th-grade year, so football just kind of left my mind,” Atkinson said. “Coach Story and the whole coaching staff helped me learn the game again, so I feel like it’s going to be easier this year.”

One of the Panthers’ biggest strengths heading into the season is its senior class, which is made up of 21 seniors. Some of the team has been starting for a couple of years, but this will be the first time the class gets an opportunity to play as a complete unit since rec ball days.

“This year playing, I feel like it’s going to come together just as it should be,” senior Alanteo Cheeks said. “We’ve dreamed of playing together our senior year. Now that’s it’s here, I feel like we’re going to show up and show out.”

Lanett starts its season at home against Georgiana on Aug. 20. With a Panther win, Story will reach the 100-win milestone as a head coach.