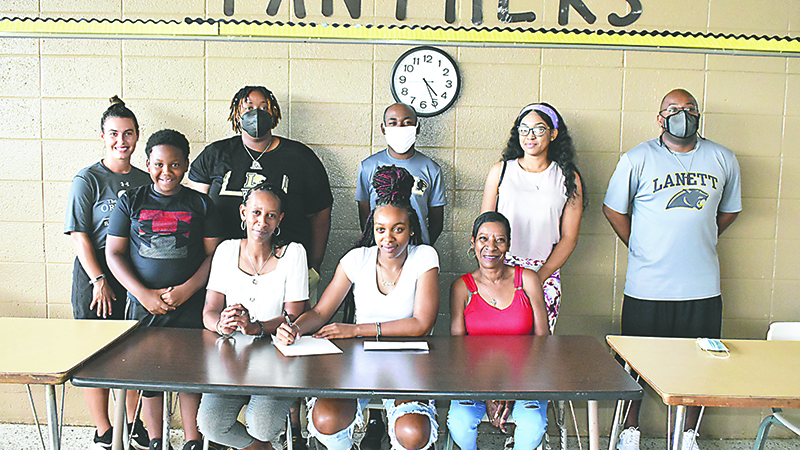 In March, Alyse Madden thought her basketball career was finished. The senior, who helped lead the Lanett girls basketball team to its first state semifinal appearance since 2012, had dreamed of playing college basketball but didn’t have an offer.

A few months later, Madden is getting an opportunity to play basketball again, as she signed her official scholarship offer to play at Enterprise State Community College.

“I got an offer out of the blue for real. I really had given up after Gadsden had pulled their offer,” Madden said. “I just started working, stacking my money and praying more often, and a scholarship came out of the blue thanks to coach Charlie [Williams].”

Madden said she had previously committed to continuing her basketball career in April, when Gadsden State offered her a scholarship, but after the school decided to pursue a different player, Madden was in limbo again. She bided her time and now she has another opportunity to play.

“I’m excited to see what I can do and how far I can go,” Madden said.

“How long can I stay on my grind and stay focused. I’m trying to stay focused, but I’m not good at staying focused on anything, especially now that I have lost my drive for this after so many uncontrollable disappointments. I really had just stopped thinking about basketball for my mental health, but I’m back on track.”

Williams’ advice to his former player — get an education and make herself proud.

“It’s huge for the program. I’m going to continue to push this program, Williams said. “I’ve been the coach for four years now, and there have been four girls that our program has sent to college. This is just another big stride to keep in going. You want to see your kids evolve from high school to college and to better things. I just hope and pray that she continues to grow as a person. The basketball part is going to come. I just hope she continues to grow as a person and doesn’t let Enterprise be her last stop.”

The senior averaged 11 points, grabbed 9.2 rebounds and dished out five assists a game. She was second on the team in blocks.

While most of her stats were among the top two or three on the Panthers’ roster, Madden’s biggest strength is her basketball IQ.

Even when she had a poor shooting night, Madden had the ability to impact the game because of her understanding of the game.

“IQ is 90 percent of basketball. People think it’s the physical ability, but if you know the game, you can cancel out the limitations in your game. She’s extremely basketball smart, and that’s going to carry her probably further than anything.”

One team that Enterprise plays will be Shelton State, where LaFayette’s Feliah Greer committed to play. Greer and Madden are as close as family, so the opportunity to play against her best friend again excites Madden.

“That’s amazing. That makes me excited,” Madden said of the opportunity to play against Greer again. “She knows where I’m going, and it’s going to be fun, back to the old days… It’s going back to the basics, me vs her, making more memories all throughout college.”