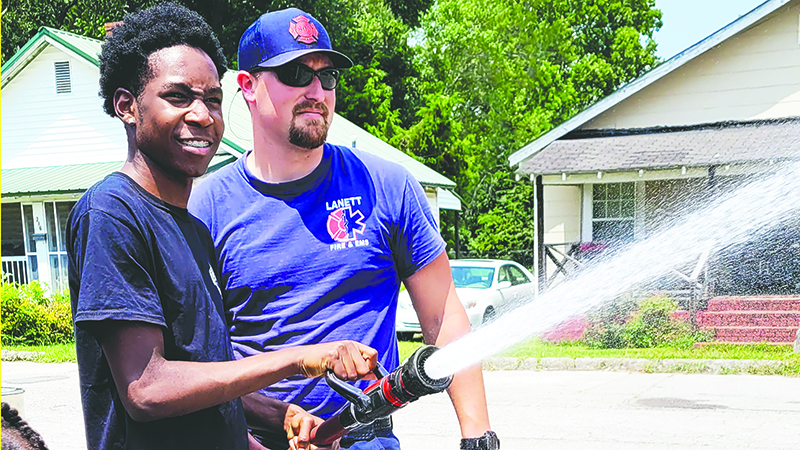 LANETT — The second of two week-long Junior Police Academies concluded with a Friday morning ceremony in Lanett. A total of 30 children in the 5-14 age group attended one of the two sessions. The Monday through Friday meetings took place at the Jane Farrar Event Center from 8 a.m. to 3 p.m. EDT each day. Directing the sessions were Lt. Brittani Reaves and Animal Control Officer Brian Roberts.

Chief Deputy Richard Carter landed the Sheriff’s Office helicopter on the playground across from W.O. Lance Elementary School for one of the sessions. “They were so excited that day,” Reaves said. “We even had people coming out who weren’t part of the program wanting their pictures taken with the helicopter. The kids also enjoyed a presentation about our SWAT team. Lt. C.J. Looser and Officer Terry Daniel showed us some videos and explained the differences in the vests they wear. They also took in some training on what to do, and what not to do, in an active shooter situation.”

Roberts talked to the children about his job as the city’s animal control officer and told them signs to look for in rabid animals.

“We plan for this all year long,” said Reaves, the city’s school resource officer. “All year long when I am in the schools, the kids tell me how much they enjoyed the previous Junior Police Academy and if we are going to have it again. They are always happy when I tell them we are planning on it. We limit each class to 15 children and have no problem in filing them up.”

The officers talked to the children about the Amanda Berry case in Ohio. This underscored how important it is for youngsters to avoid accepting a ride from strangers and to always be wary of their surroundings. Berry, the children were told, disappeared the day before her 17th birthday in 2003. The last her family would hear from her in years was when she phoned her sister telling her than someone had offered her a ride home from her job at Burger King. That individual was a man named Ariel Castro. He took the young girl to his home and held her against her will until she escaped almost 10 years later. Castro also held two other young girls, Michelle Knight and Gina DeJesus, against their will. Following Berry’s escape, he was arrested and charged with four counts of kidnapping and three counts of rape. He later pleaded guilty to 977 charges against him. He was sentenced to consecutive life terms plus 1,000 years, all without the possibility of parole. At his sentencing he blamed it all on the girls saying they should have never got in the car with someone like him. One month into his sentence he hanged himself in his cell.

“We wanted them to hear about this so that they will always be alert and wary of strangers, even in their own neighborhoods,” Reaves said.

The Junior Police Academy kids also took the Fatal Vision challenge. This involves putting on a pair of goggles that simulate being under the influence. While wearing the goggles, the youngsters are asked to navigate their way around an obstacle course of orange cones. The object is to place a ring on a hanger at the end of the course. “It’s easy for anyone to do this when they are not wearing the goggles,” Roberts said, “but with those goggles on almost no one can. None of our kids were able to run the course without running into a cone or dropping the ring.”

Something new in this year’s Lanett Junior Police Academy was a course on vapors. “This is a big problem with our youth,” Reaves said. “We wanted them to understand how doing this can affect them and that they need to stay away from it. Despite the fact you have to be 21 to legally purchase vapes, younger people are acquiring them, and that’s not good.”

Reaves and Roberts took some special precautions due to the hot weather we are now having. “I never let them stay outside more than four or five minutes at a time, and we made sure we had plenty of cold water on hand,” she said. “We talked to them about heat safety and the signs of heat exhaustion.”

The kids had a fun day on Thursday. They were taken to the Water Wiz off Roanoke Road west of LaGrange. “We all had a a lot of fun cooling off on a hot day,” Reaves said.

Friday morning was cloudy and a bit cooler than it had been during the week. Reaves and Roberts divided the youngsters into teams, and they all enjoyed a game of kickball on the grass field outside the event center.

“We had two good sessions this year,” Reaves said. “I know the children had a lot of fun, and I hope they learned some important lessons about life.”