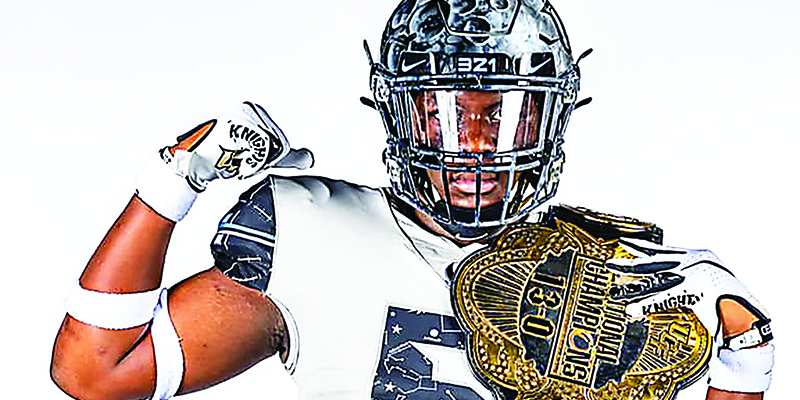 Caden Story’s life changed on Aug. 1, 2020, when his cousin Quae Houston, who was as close as a brother, died suddenly. Story’s life will once again change on Aug. 1, when he will announce his college decision.

“I wanted to get it out of the way before the season, and my brother died on Aug. 1. I was going to honor him that way,” Story said. “For me, it’s something that we always talked about whenever we were around each other. He always told me that I was going to be big and do great things in life. Now that I can see all these things unfolding, it really makes me happy, but it makes me sad that he’s not here to celebrate it with me.”

The 2020 2A Lineman of the Year has 16 colleges he could choose from, but after taking his official and unofficial visits, Story has named his top five choices: Auburn, Texas A&M, UCF, South Carolina and Florida State.

With its close proximity, Story has visited Auburn twice, taking his last visit to the Plains on June 19.

“It was really great. It was a great environment, family atmosphere, great facilities and great coaching staff,” Story said. “They were telling me how they could use me. I really enjoyed it down there.”

Story built a relationship with Auburn early in his recruiting process, something that new head coach Bryan Harsin made sure to continue once he took over in late December.

“They kept it real,” Story said of the coaching staff. “ They were telling me how they can move me around and how athletic I am. They have just big guys there now, so they’re getting them big and athletic now.”

He also took his second visit to Auburn with his cousin Micah Pollard, a three-star prospect from Jacksonville, Florida. Pollard was also there during the UCF visit.

“UCF, it was extremely fun. I enjoyed the facility, the photoshoot and the coaching staff,” Story said. “It also felt like home.”

One of UCF’s main drawing factors for Story is his relationship with head coach Gus Malzahn.

Story’s final official visit was to South Carolina, which was June 26. Overall, he wasn’t overly impressed by his visit, but he still listed the school as one of his top-5 schools.

“It was okay. I liked some stuff that I saw,” Story said. “I interacted with the players, had the photoshoot. I did the same thing that I did at all the other schools.”

Earlier this offseason, Story had toyed with the idea of taking some visits during the school year but has now decided that he is done taking visits.

Though he hasn’t visited Florida State or Texas A&M, Story said that he

“They’ve built a relationship [with me],” Story said. “They haven’t stopped communicating, texting, calling and emailing since, and I really like that about them.”

Last season, Story traveled to most of his brother’s games, getting a chance to see half of the SEC West’s stadiums whenever Alabama made a road trip. This season, Alabama travels to Texas A&M, so Story will get an opportunity to see the campus before he officially signs.

Story finished 2020 with 15 sacks, 58 tackles and 18 tackles for a loss. He also finished with 26 quarterback pressures.