Lanett’s Tieko Williams steps up as leader in senior season 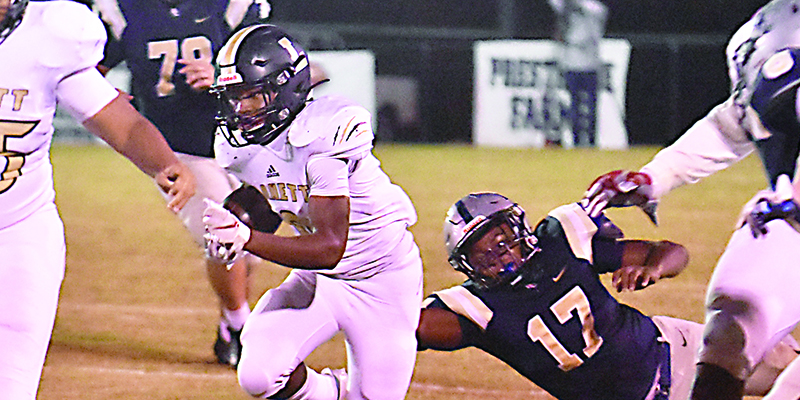 Entering the 2021 season, the Lanett football team knows that it has a lot to replace on offense, as four players were responsible for more than 3,400 yards of total offense, most of which were receiving yards.

While Lanett had a solid rotation of receivers a year ago, which allowed the second group of players to get plenty of snaps during meaningful moments during the game, the Panthers will return only one player who started a season ago at receiver — Tieko Williams. Williams started in spots when Lanett had an injury.

Now heading into his senior year, Williams is embracing his role as a leader and deep threat for the Panthers.

“I feel like we all have to come together,” Williams said. “The seniors that just left, I got a big role from them. They taught me a lot, so I have to just transfer what they taught me to this year. I had a great experience when I stepped out on the field [in 2020]. I just give it my all. I had them on the sidelines telling me that I can be better than what I was last year.”

According to Head Coach Clifford Story, who has coached Williams since he was a freshman on varsity, the biggest step Williams has taken this past offseason was his confidence.

“Tieko’s confidence has risen a lot. He’s worked extremely hard, you can see by the development of his body,” Story said. “Last year, Tieko had a few good games for us, but there were certain points of the game where he was afraid of the lights. Now, his mindset is extremely different. He’s working extremely hard, and he’s showing that he is ready to compete night in and night out for us on Fridays. He’s taken on a leadership role. He’s being more vocal, he’s talking a lot more than he has in the past. I’m just excited to see what his senior year is going to bring. He’s going to be a guy that we rely on offense, defense and special teams. He’s going to be an integral part of what we’re trying to get done this year and what we’re trying to accomplish.”

The past two years of his high school career, Williams has been a two-sport athlete, playing both football and basketball. This past year, Williams ran track, helping the Panthers finish top-5 in the state in the 4×100 relay.

“Track, it taught me a lot,” Williams said. “It helped me with my speed, controlling my speed, staying balanced. It really helped with conditioning. I really try to play all sports so I can get some conditioning because I know that I’m going to be giving football my all.”

For most of his high school career, Williams has been a quiet guy, never really trying to draw attention to himself. He was more comfortable with his friend group compared to a larger crowd, but now Williams is stepping out of his comfort zone, talking to various players, giving tips. He’s just being a leader.

“We don’t really have a whole lot of leaders right now. We have a lot of voices but not a lot of leaders,” Story said. “For me to see the things that he is doing and the things he brings to the table, it speaks volumes for him. He’s matured. That’s the big thing. He’s able to be a little bit more vocal and show a little bit more continuity with the guys. Normally, Tieko is one of those guys that he had two or three guys that he laughed with and talked with, but he’s bringing the younger guys along now. Whenever we are doing the drills, he is usually one of the first ones in the drills and leading the drills.”

This summer Williams has begun his recruiting process, participating in a couple of different camps including one at Southern Miss in June. At the end of his senior year, he hopes to play receiver at the next level.

“The camps have been great, but I think I know what I want to do when the time comes for my recruiting process. I think I’m going to a junior college first then transfer to a university,” Williams said.