Service held for eight children killed in I-65 crash 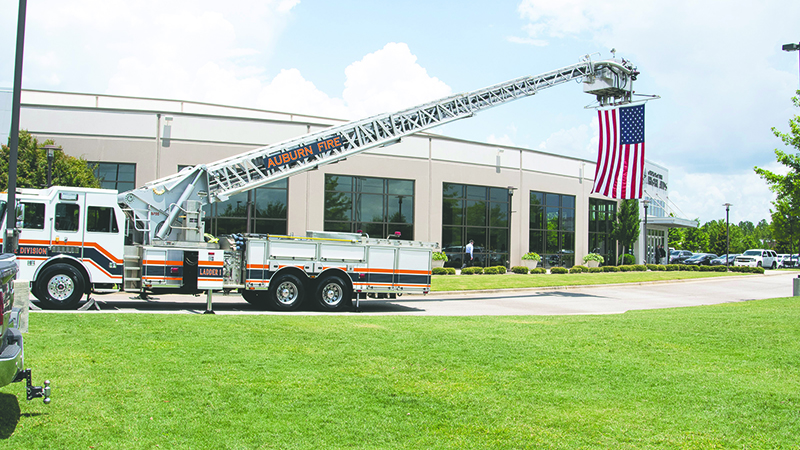 An American flag was raised up by an Auburn Fire Department truck outside of Church of the Highlands, where a celebration of life service was held for the eight children who lost their lives in a crash on Interstate 65. --Cliff Williams

They were typical teenagers, children and a toddler figuring out life. Some were siblings. Some were cousins. Some were roommates. Others were no kin. But all were part of a family — the family of the Alabama Sheriff’s Youth Ranches and the Tallapoosa County Girls Ranch.

The eight children who tragically lost their lives last month as they were returning from a mission and beach trip were celebrated Thursday at Church of the Highlands in Auburn.

Ranch director Candice Gulley was driving the van and was the only survivor. Two of the children in the van were hers biologically but they were all a “blessing to my life.”

“Whether they shared my blood or they didn’t, they were my children,” Gulley said. “Many of those gathered today are my children. To be around these kids was to be around encouragers. When they saw people who were sad, they encouraged them.”

It was Gulley’s first public remarks since the accident. Gulley said she and the ranch have had tremendous support in the past few weeks, and she knows where all eight children are.

“They are in the presence of the King,” Gulley said. “They are worshipping him face to face.”

Gulley said many have prayed for the ranch and supported the ranch other ways. Many have approached her since the accident telling her she is strong, but Gulley said she has had help.

“I lost my children and it hurts,” she said. “I’m not strong. My God is. You draw nearer to him, he will draw closer to you.”

Fountain Gate Church pastor Dan Lane had several of the children in his congregation. Many from the church were there to support the ranch family and house parents Eric and Stephanie Strong, who lost four of the ranchers in the accident. They may not have been biological children, but they were still family.

“They are no longer orphans,” Lane said. “They are with their father.”

Many were baptized at the ranch as many other “sisters” have been too. Many of those sisters came to the celebration to honor the memory of those who came after them and let those still there know they were not alone.

Stephanie Strong said Dana, Haley, Makenzie and Tia “were amazing girls; they had big personalities and made a positive impact on the world during their time here.”

“Haley had lots of energy,” Strong said. “She loved to babysit for hours. When there were no babies around to babysit, she would volunteer to do things. She would weed the garden. She would clean out the supply closets.”

Strong said Haley and Tia did something special just days before they perished.

“On the beach trip, they helped a single mom in the grocery store,” Strong said. “They entertained the kids while she checked out, helped her get the groceries to the car and prayed with her.”

“She made bracelets for people,” Strong said. “She served with all her heart at ranch events.

“When Tia would get into trouble, which she was apt to do, I would give her extra chores like scraping paint from the fence. I soon learned extra work was not punishment for Tia. Tia might have gotten into a lot of trouble, but she was humble and repentant.”

“Dana loved llamas,” Strong said. “She would write songs about llamas. I have a video of it. She was very musical. She was a very imaginative storyteller. She was very thoughtful. She loved opening gifts and had the best reactions.”

Dana was roommates with Makenzie.

“Dana loved to cut grass on the riding lawn mower as did Makenzie,” Strong said. “They were often together and often partners in crime.

“Makenzie was sweet and soft-spoken. She loved to write notes to her house sisters on the marker board and mirrors. She wanted them to feel beautiful and special. She always made time to help the girls get ready for special occasions by helping with their hair and makeup.”

Stories about Bella and Ben were shared. Ben led a toddler gang as the “sisters” helped clean up the Baldwin County Boys Ranch as they headed to the beach.

“Bella was the kindest young person you would ever want to meet,” Smith said. “She loved hanging out with her friends and doing normal teenage girl stuff. Ben never met a stranger and was always ready to help figure everything out for them. He loved hanging out with his family especially when they would wander out on one of their many adventures.”

Josiah “was a such a bright light with a smile that could light up any dark room,” Smith said. “He loved spending time with his family and helping anyone in need, as well as making people laugh. Nicholas was the baby of our family and no one could resist his cute little face. He loved animals and dreamed of having his own dog…. He was a true momma’s boy.”

“You always remember where you were when it happened,” Smith said. “I remember when Kennedy was shot. I remember the space shuttle exploding, 9/11, when the tornadoes that tragically went across Alabama. I remember June 19 — we lost those eight children. We don’t want them to go forgotten, and they won’t. I can promise you that.

“Always remember those eight lives lost and all loved God. We know where they are.”

Smith said volunteers have helped at the girls ranch and almost 8,000 people have supported the ranch through financial donations.

“At our ranches we love God and country,” Smith said. “It’s been incredible how America has embraced our ranches.”

“Prayer has gotten us through all this,” Smith said. “The legacy of those young people we lost will go on living forever at the Alabama Sheriffs’ Youth Ranches helping more children and young people than ever. I can promise you that.”