Welcome center on I-85 nears completion 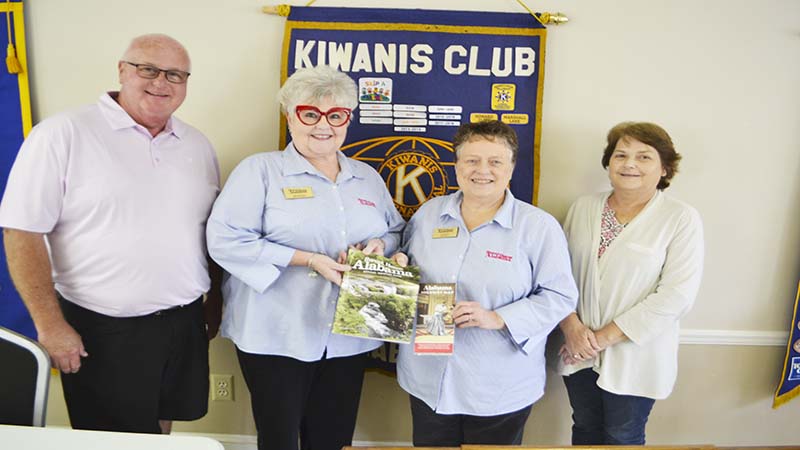 VALLEY — Laura Smith, the director of the Alabama Welcome Center on I-85, was the guest speaker at Wednesday’s noon-hour meeting of the Kiwanis Club of Valley. She and other members of the staff have been at a temporary center in Opelika for the past year-and-a-half while a new center is being built.

“They told us it would be a year-and-a-half before it would be ready,” she said. “It’s been that long, but it may be September before we will be in the new building. We are excited to be this close.”

The interior of the building is more than 80 percent finished. Excessive rainfall this summer has slowed the outside work. The parking lot has yet to be paved.

The new center will be open from 8 a.m. until 5 p.m. seven days a week. The main building will be locked overnight, but restroom and concession areas will be open 24-7.

“The new building will be a good bit larger than the old one,” Smith said. “It’s going to be really nice. When you walk in the front door, the information desk will be in front of you, my office will be to the right and all kinds of brochures to the left.”

The new restrooms will be vastly improved over the ones in the old center. There were times in the past when the staff had to assist people with disabilities when they had to use the restroom. At times, they would have to lock the door while they were helping them. The new men’s and women’s restrooms will be much larger and with more stalls. In addition to the men’s and women’s restrooms, there will also be family restrooms for young boys and girls.

There will be large storage rooms and a Department of Transportation (ALDOT) office. New furniture will be going in soon.

“The old building served us well for 42 years, but we had our share of problems with it,” Smith said.

The original welcome center opened in August 1977. George Wallace was the governor at the time and spoke at the opening ceremony.

“I can remember working there for two summers while I was a student at Auburn,” Smith said. “Another girl and I served free drinks to people stopping by.”

There will be a lot more room for truck parking at the new center. There’s also going to be a large front porch. Smith said she’d like to have some rocking chairs there to underscore the Sweet Home Alabama theme.

Tourism Day in May is always a big day at the Alabama Welcome Center. It hasn’t taken place the last two years because of construction work.

“We plan to have a big one next May,” Smith said. “We have to start working on it several months in advance. There are lots of vendors we have to contact to see if they can be there that day.”

Tourism Day usually attracts hotels, restaurants and tourist destinations throughout the state. They want to be there to invite the traveling public to come and see them when they are in Alabama.

“We will be going to the Governor’s Conference in August and to our annual Welcome Center retreat in October,” Smith said. “It will be in Selma this year.”

Smith said Covid-19 has had a definite impact on tourism.

“People have gotten back to getting out this year,” she said, “but this new Delta variant really scares me. Covid is not just a cold. It’s something that can kill you. I think most all of us have known people who died from it.”

Smith said she and her staff deal with all kinds of questions.

“People think we know everything,” she said. “We don’t, but we try to help them the best we can. We will tell them how far a certain place is, the best way to get there and how long it will take.”

Every February the staff gets lots of questions about Mardi  Gras in New Orleans. The standard answer is that it’s 498 miles and seven-and-a-half hours away. Stay on 85 to Montgomery, then get on 65 to Mobile and then I-10 to New Orleans.

Smith said one visitor puzzled her one day when he asked her what that big blue road went to. She asked him to explain. and he pointed to the big map in the room.

“Oh,” she responded. “That’s not a road. It’s the Chattahoochee River.”

Encounters like this, she said, can be difficult to deal with. The first instinct is to laugh, but care must be taken not to hurt anyone’s feelings. Guests entering the state must be made to feel welcome and treated with respect.

“Working at the Welcome Center is a wonderful job,” said Melinda “Modo” Edwards, a long-time member of the staff. “You have to be a people person,” Smith added. “It sometimes takes patience when dealing with people. You have to do all you can to make them feel they were treated right.”

A tough part of the job is the long hours of standing on one’s feet.

“We have to be up when anyone’s in the building,” Smith said. “We can sit down when no one’s there, but that doesn’t happen very often.”

Smith said she has learned over the years to make the directions as simple as possible.

“Don’t complicate it for them. You want them to understand you and to have a good time when they are in Alabama.”

A new feature in the new Welcome Center will be a big screen TV that constantly gives weather conditions throughout the state while telling about traffic delays and road closures. ALDOT has an app that updates travelers as well.

The temporary visitor center has been located off the US 280 exit in Opelika. It’s well marked with signage but is still hard to find for some people.

“The funny thing is that people who are from out of the country don’t seem to have any trouble finding it,” Smith said. “It’s travelers from this country that complain about us being hard to find.