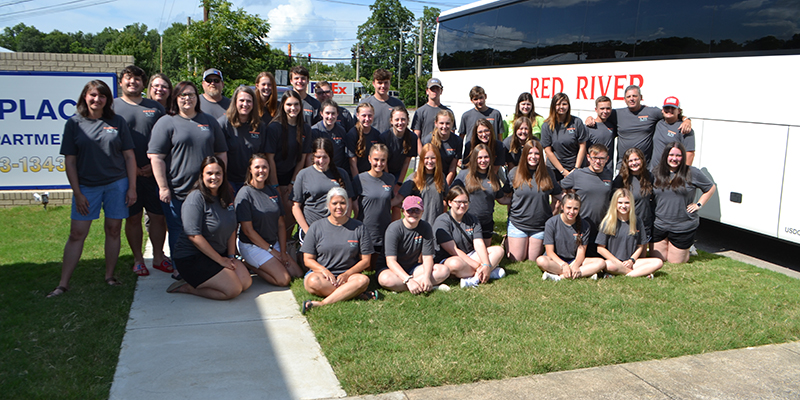 WEST POINT — A group of 44 youngsters and their adult church leaders left Point Place Saturday morning bound for home in Minden, Louisiana. They were from the First Baptist Church in Minden and had spent the past week working on volunteer tasks for the Chattahoochee Fuller Center Project (CFCP).

During the early part of the week, the energetic group of teens put together 42 sets of walls for CFCP Home No. 66, which will be going up in West Point during the first week of October. Later on they completed much needed work at a house in the Lanett mill village.

“We cleaned up around a house someone had moved out of,” said Jodi Tuttle, adult volunteer. “We painted on the outside and cleaned up on the inside. We painted the porch, the mail box and the window sills. We also tore down and removed an old shed.”

They restocked shelves inside the ReUse Store one day and helped West Point Mayor Steve Tramell take groceries to some needy families. Toward the end of the week they went to Opelika to meet Officer Michael Roberson. Nicknamed Officer Robo, Roberson has been disabled by strokes. The CFCP is taking on the task of building a ground-level bedroom and bathroom to help them with the disability.

“On Thursday evening, we were guests at the home of Bill and Martha Scott in Lanett,” said Youth Pastor Chad Parker. “The kids had a great time in their pool. On Friday afternoon, we took them to the Shaefer Heard Day Use Area on West Point Lake. We grilled out for them, and they enjoyed splashing around in the lake.”

The project in the mill village was on South 3rd Street.

“It’s a house we have flipped,” CFCP Executive Director Kim Roberts said. “We will have a family moving in there.”

Parker described the week as a mission trip no one will ever forget.

“It couldn’t have gone better,” he said. “We try to have a mission trip each summer. This one is going to be hard to top. Kim (Roberts) and Robin (Pierre) made us feel like we were their mission project. They saw that all our needs were met. The service at the local restaurants was great. Johnny’s Pizza, Subway and Marco’s Pizza catered meals for us. Terri’s Mill Village Cafe catered us twice, and their food is great. Pastor Michael (Stiggers) of the CFCP made some peach pies for us, and Mr. Randy brought us 12 watermelons one day. No doubt about it, we were very well fed this week.”

Tuttle and Parker said that the 31 youth and 13 adults making the trip very much enjoyed their stay at Point Place, which is located right behind Roger’s Barbecue off Avenue C in West Point.

One evening they were treated to a Disney movie on the lawn in front of the building.

“We want to thank everyone on having been so nice to us,” Parker said. “We had a great experience here. We hope to come back again one day.”

Tuttle said they were most impressed with the CFCP’s continuing home building efforts and its Block of Blessings effort, in which entire neighborhoods are spruced up.

“They told us they wanted to do a Block of Blessings in Minden when they get back home,” Roberts said. “I told them to go for it. They told us they liked what they saw about it on our Facebook page. It was such a blessing for us to have had them here.”

The CFCP’s leadership role in the 2019 Beauregard build is continuing to pay dividends in Lee County. The Officer Robo project is an example of that. Another example is being provided by the Auburn University Building Science Department.

“They built two small, fully furnished houses for us,” Robert said. “I’m so excited about it. They should be ready by the end of the summer. I went down to look at them with Chief Johnny Allen (of Lanett Fire & EMS). He was impressed with the job they did.”

The two homes will be brought to Lanett.

“We are working on finding families to live in them,” Robert said. “The Beauregard experience really put us on the map. It introduced us to some new partners who have been really helpful.”