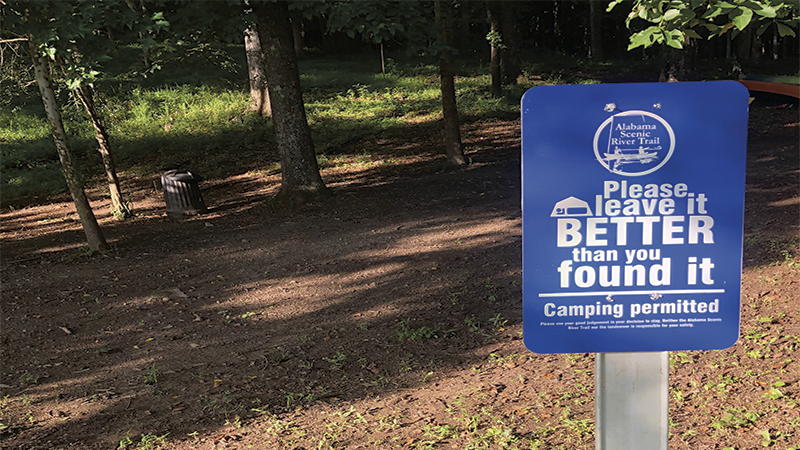 Weary paddlers in Chambers County can safely and legally camp along the Chattahoochee River thanks to campsites established by the Alabama Scenic River Trail and cooperative landowners.

Two are currently completed, according to ASRT Founder and Operations Manager Fred Couch. They are located at the Holiday Army Corps Campground (in Georgia, opposite of Chambers County) and at 2005 Newton Road in Valley. Couch said the campsites are free to use. Other locations are being discussed, and Couch said he plans to have five to six locations in the Chambers County area.

Couch said he’s added over 327 campgrounds along the ASRT in 14 years, 216 of which currently are on the ASRT website. He said he started this project to give tired paddlers places to legally camp overnight.

“You pull over for the night, and you just kind of don’t sleep,” he said. “You kind of half-sleep because you know you’re not supposed to be there. It’s not your land. And any sound, you just kind of bolt, run.”

Couch said he once heard from a man who had been shot at after approaching some people on a bank.

“[He said], ‘I was going to ask them if I could stay on their land, and they started shooting at me.’ And he said, ‘I quickly retreated. I went downstream. It rained that night. I stayed in a ditch. I was afraid to turn on my flashlight. I was wet, and I was afraid to put up my tent. My sleeping bag was wet. My clothes were wet. I was ready to jump up and go at any moment because I was trespassing.’”

Couch said many of his organization’s campsites have amenities. He said the Army Corps campground has bathrooms and other amenities “like a full-blown campground.”

ASRT is also working on a project to put up mile markers along waterways to aid first responders when there is an emergency call on a river. They are intended to allow people in trouble to share their exact locations with first responders.

“That’s a project we started five or six years ago,” he said. “That is a sign that’s square, blue, has the name of the waterway on the bottom of it, and has the mile position. And we use the method that the Army Corps uses for waterways — we count from the bottom up. Wherever it meets another stream is zero, and then we count up from there. These are aluminum, and they’re UV-treated and anti-graffiti-treated, and the idea is to put them on trees.”

Couch said that while the ASRT supplies the signs, first responder groups have to apply for them and set them up.

Couch said he gets some of his information on potential campsite locations from county commission and chamber meetings.

A list of campsites along the ASRT is available at https://www.alabamascenicrivertrail.com/links-to-individual-campsite-pages/.