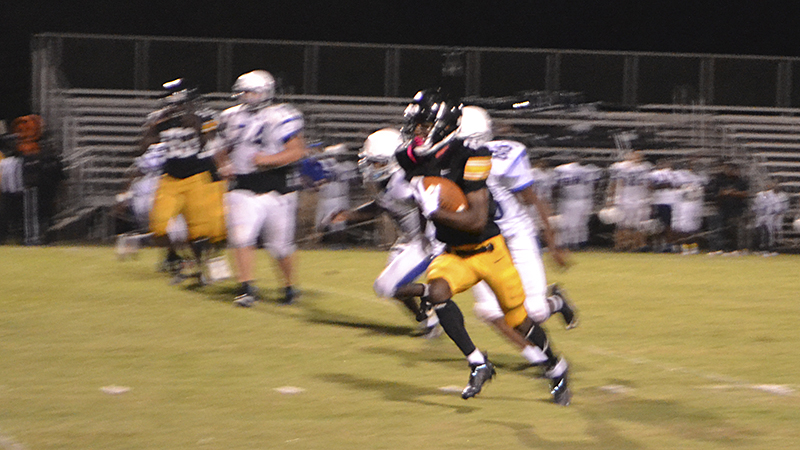 LaFAYETTE — Valley transfer B.J. Baker scored three touchdowns to help lead his new team, the LaFayette Bulldogs, to a resounding 53-14 win over the Coosa Central Cougars Friday night at Bulldog Stadium, Junior running back Joshua Combs ran for two scores as LaFayette jumped out to leads of 20-0 at the end of the first quarter and 41-6 at the half to leave no doubt who the better team was.

Lineman Tae Woody scored two TDs for LaFayette, but only one of them counted. He ran the ball across the goal on a version of the fumblerooskie play but it was negated on an illegal procedure call. The one that counted was on defense when he recovered a fumble in the end zone.

It was a great way to start the season for the Bulldogs. They take on the always tough Randolph County Tigers next week and cross county rival Lanett on Sept. 17.

LaFayette’s 2021 season began under a light summer shower that quickly diminished. After holding the visitors to a three-and-out on their first possession, the Bulldogs started their first drive of the season on their 45 and quickly reached the end zone. Three runs by Baker accounted for most of the yardage. He scored his first touchdown in a Bulldog uniform on an 18-yard run off the right side of the line. A successful PAT made the score 7-0 LaFayette at the 8:20 mark of the first quarter.

Coosa couldn’t move it on their second possession and wound up punting on fourth and 24. The Bulldogs put the ball in play on the Cougar 41 and started their second scoring march of the night. Combs got the score on a 26-yard run around left end. The point-after made the score 14-0 with 2:48 left in the opening quarter.

Things went from bad to worse for Coosa Central on their next possession. Penalties and lost yardage plays backed them up inside their 10. They punted on fourth and 16 from the nine. The kick went straight up and off to the right, coming to rest on the Coosa Central seven. It went down as a kick of minus-two yards.

That’s when LaFayette went to Woody’s fumblerooskie play. The 6-5, 260 pound lineman picked the ball up off the ground and headed right behind a convoy of blockers. He easily made the west end zone  just inside the orange pylon, but the play came back on a penalty.

“I guess they will just have to do it all over again,” said stadium announcer Ed Vines. And they did.

Baker took a handoff off the right side of the line and scored on a 12-yard run to make it 20-0 on the final play of the first quarter.

The PAT was wide left, but the Bulldogs looked to be in complete command.

The game got even more out of hand in the second quarter. The Bulldogs scored three more times to take a 41-6 lead at halftime.

The Cougars had their best drive of the night on their next possession. Following a short kickoff, they put the ball in play on their 41 and took it 59 yards for their lone score of the half. Quarterback Culpepper made some nice plays on the drive and had a scoring pass to wide receiver Epps in the left corner of the end zone. With 6:24 of the first half, the Cougars had narrowed the score to 20-6.

With Baker and Combs eating up big chunks of yardage on running plays, the Bulldogs went 59 yards on their next chance on offense. They regained their three-TD lead on a 22-yard run by Baker off the right side of the line. The point-after made it 27-6 with 5:05 left in the half.

A muff on the kickoff put the Cougars in a deep hole on their next possession. They started from their eight, couldn’t move it, and once again called on their punter to give them some field position. Once again it wasn’t much. The kick went straight up, landed on the 10 and rolled dead on the Coosa Central 13. From there, it took LaFayette only one play to score. Combs took a pitch from quarterback Tazarius Towles and swept untouched around left end for his second TD run of the half. The PAT made it 34-6 with 3:46 left in the half.

The nightmare continued for the visitors on their next possession. They started on their 21, and on a third and 14 play, a low snap skidded between the quarterback’s legs. Culpepper went back to fall on it, but knocked the ball into the end zone. A swarm of Bulldog players went after it with Woody making the recovery for a touchdown. Another successful point-after try extended the Bulldog advantage to 41-6 with 3:13 still to play in the half.

“That’s two tonight!” big Woody yelled as he left the field. Only one of them counted, but when you win 53-14 it doesn’t matter a whole lot.

With the game out of hand, the officials ran the clock continuously in the second half to shorten the game.

LaFayette’s backup players held their own against Coosa Central’s starters.

Backup quarterback A.J. Patrick fired a 56 yard scoring pass down the middle to Cartavious Silmon to extend the lead to 47-6 with 9:50 left in the third quarter. On their next possession they hooked up for another scoring play to make it 53-6 with 3:13 left in the third period.

Coosa Central got a consolation score and added the two-point play late in the game to make the final 53-14.