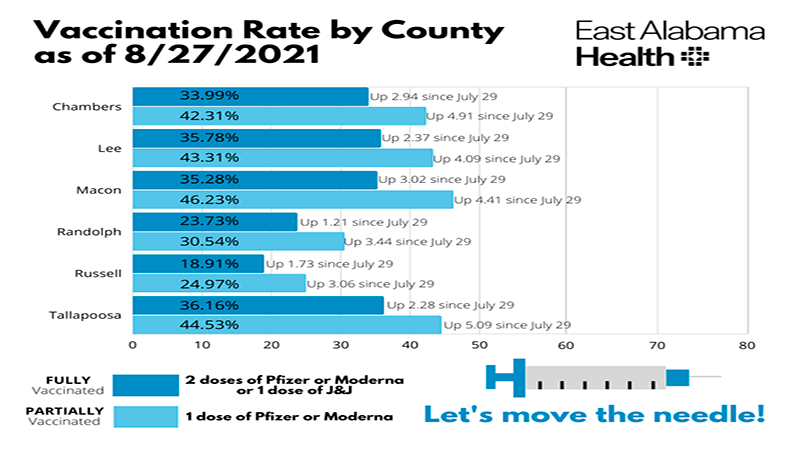 On July 29, 37.40 percent of Chambers County residents were partially vaccinated. By Aug. 26, that percentage had climbed up to 42.31.

Nearby Bullock County had the best overall numbers in this region with 51.16 percent of its residents having received at least one dose. Their full vaccination rate of 39.91 percent was also the highest in the region.

There were 2886 confirmed COVID-19 admitted patients statewide Friday (up from 2879 Thursday). Alabama hospitals had only 179 COVID-19 patients on July 3.

Of the 2886 patients with COVID Friday, 47 were pediatric patients.

There were 843 (44%) of hospital ventilator resources available.

There were 51 confirmed COVID-19 deaths in Alabama reported Thursday.

East Alabama Health equaled its 4th-peak high Friday with 77 patients hospitalized with COVID-19. Meanwhile, ventilator usage returned to 16, where it had been four of the past six days.

Of the 77 patients hospitalized Friday morning, 59 of them were unvaccinated while 13 were fully vaccinated and 5 were partially vaccinated.

“Like other hospitals, we are seeing some breakthrough cases among vaccinated individuals who end up needing to be hospitalized,” stated John Atkinson, East Alabama Health spokesman. “The Delta variant is much stronger than the original strain and that lessens the efficacy of the vaccine some. Plus, most of the vaccinated we’re seeing were among the earliest people to be vaccinated — mostly an older and/or immunocompromised population. The immune response from the vaccine may not have been as strong as with younger, healthier populations, which is why booster shots are being recommended soon.”

However, the key statistics to look at, according to Atkinson, are the ICU numbers and ventilator numbers.

“Of the 23 COVID patients in the ICU today, 20 of them are unvaccinated,” he said. “And 14 of the 16 on ventilators are unvaccinated. Clearly, vaccination makes a huge difference in the severity of symptoms if a patient has to be hospitalized.”