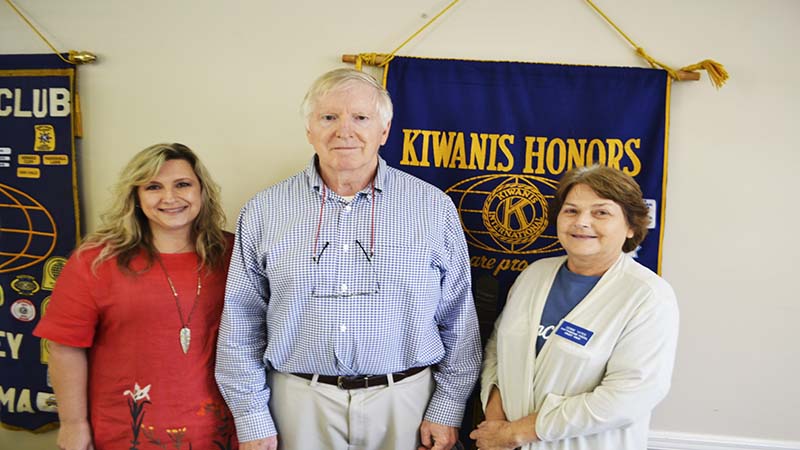 VALLEY — CharterBank was sold several years ago and its former offices in West Point, Valley and LaGrange are locations for Southstate Bank. The sale did not affect the ongoing work of the Charter Foundation in the local area. Since its founding in 1995, the Charter Foundation has been a separate entity from CharterBank. The good work it does in Chambers County on the Alabama side and in Troup and Harris counties on the Georgia side goes on.

Charter Foundation Board Member Bill Gladden talked about this in a PowerPoint presentation during the noon hour on Wednesday at the Kiwanis Club of Valley.

The foundation was organized as a 501(c)(3) nonprofit with a $2 million endowment. Its current endowment is more than $7 million. The Charter Foundation has an annual budget of $300,000 and uses five percent of average assets each year.

“I am really excited about what goes on at the Foundation,” Gladden said. “From its founding in 1954, local people were loyal to First Federal and remained loyal to CharterBank. The Foundation offered a means of giving back to the community for its long-time loyalty.”

Over the years, Charter Foundation grants have helped Point University, LaGrange College, the Chattahoochee Early Learning Academy (CELA) in West Point, exhibits at Bradshaw-Chambers County Library, a summer reading program at Goodsell Methodist Church in Lanett, the Christmas Merry Go Round in Valley, Fort Tyler, cleanups on West Point Lake and with the purchase of a new van for the EAMC-Lanier Nursing Home.

The Foundation’s Great First Impressions program is aimed at improving appearances in the local community. Grants have assisted with landscaping for Lanett’s downtown streetscape project and has helped in the repair of buildings.

Over the years, the Charter Foundation has given $1,000 scholarships to deserving local high school graduates. Students who receive these scholarships have been recommended by their counselors. In the 25 years this has been done, approximately $165,000 has been given out in scholarships to local college-bound students.

One of the Foundation’s more popular programs is community voting. It began as customer voting with CharterBank customers deciding the grant recipients. When the bank was sold, it continued on as community voting.

“Since it’s not limited to bank customers, everyone in the community can vote now,” Gladden said.

Voters must live in Chambers, Troup or Harris County. Each person can vote only once, and each ballot gets three votes. There’s a list of worthy local causes the voter can choose between. Each winning organization gets a $5,000 unrestricted grant. The most recent winners are Huguley Elementary School, the Christian Service Center and Point University.

Some of the online votes came in from unexpected places like Northern Ireland, The Netherlands and The United Arab Emirates.

“I have no idea how they got on there to vote,” Gladden said.

The most recent voting ran from June 1st to July 31.

“If you win one year, you have to skip the next year to be eligible again,” Gladden said.

Gladden said it’s difficult to turn down grant requests. He said he’d once gotten a letter from someone who had been turned down. Perhaps they were joking but they told him something to the effect of “It is with regret that we cannot accept your refusal and expect to receive your check in the mail.”

When seeking a grant, Gladden said it’s a good idea to be specific about expected costs.

“If you are seeking playground equipment, list the cost of each item being sought,” he said. “We may can fund some but not all of the items being sought. Don’t write us a book with your requests. I don’t think you want to write something that detailed, and we may not have time to read it.”

There are two annual deadlines for grant requests. The first deadline is April 1st and the second one October 1st.

“The Charter Foundation is alive and well,” Gladden said. “We have distributed over $8.6 million since 1995 and expect to distribute $300,000 a year for the coming years. I think we have served our community well over the years.”

The grants are awarded on the second Tuesday in May and the second Tuesday in November. To be considered, grant requests must be in by April 1 and October 1. They can be emailed to: bbonner@CharterFoundaton.net or mailed to Charter Foundation, P.O. Box 5, Valley, AL 36854. Gladden offered some hints for success.

“If it’s big, talk to someone,” he said. “Ask for a meeting and get a board advocate. Give us options. If possible, break the project into pieces.”